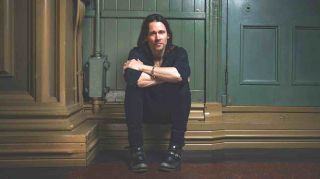 Myles Kennedy doesn’t always seem at ease with the role of larger-than-life frontman. Not for him the self-aggrandisement that comes with the job. If he is a rock star, he seems like a reluctant one.

That must make life difficult, given that the singer and guitarist a key part of two leading bands – arena rock flagbearers Alter Bridge and Guns N’ Roses guitarist Slash’s solo outfit The Conspirators. And that's before you even take into account of the fact that his name has been linked with both Velvet Revolver and, unbelievably, Led Zeppelin.

Whether he likes it or not, the polite and self-effacing Kennedy is one of modern rock’s key figures. Here he looks back on a life that's been peppered with tragedy and triumph.

“I was born in the woods and raised by wolves. Ha ha! No, I was born in Boston, Massachusetts, a long time ago [November 27, 1969, to be exact…]. Prehistoric man still existed. I’m an old man. I’ve been touring for a long time and I’m starting to fall apart!”

“I had an interesting childhood. It was good. I was very fortunate to have wonderful parents. I had a rough patch early on because my biological father passed away and obviously that was difficult for the whole family, for my mother, my brother and me, but my mom met a really cool guy years later and he took all of us as his own. That doesn’t happen all the time, so for that I’m really grateful.”

Would you say that losing your father unsettled you at a formative stage, making it more likely that you would embrace the unsettled life of a musician?

“I think you’re right. That’s a fair assessment. Also, when something emotionally powerful like that happens, it tends to always be a well that you can draw from for material when you write songs. Those formative years are so important to the development of you as a human being, and as a songwriter I go back to those emotions a lot. They never really go away.”

“A little bit, yeah, because of the way things went down, losing my father in the way that I did. Ultimately he died because he believed that he’d be healed by God and he didn’t see a doctor, so that’s something I struggled with for many, many years and it left me with many unanswered questions. I was still part of a Christian household, because my mother married a Methodist minister, but as the years went by I realised that it just wasn’t the truth for me. Some people find massive solace through religion and that’s great. I wish I still had that.”

Were you a good student at school?

“I worked really hard at it. I wanted to do well but then I discovered the guitar and that was it! I literally went from getting good grades to getting horrible grades within three months. Suddenly my parents were like, ‘What the heck is going on?’ and I was saying to them, ‘In case you hadn’t noticed, I’ve been in my room for eight hours a day widdling away on the guitar!’”

When did music become such an important part of your life and your identity?

“It started to grab me early on. Not too long after my father passed away I remember hearing Elton John and Stevie Wonder on the radio and thinking, ‘Yeah, that’s really cool’, but then I heard We Are The Champions and We Will Rock You by Queen and I was like ‘OK, what is this?’ I saved up my allowance and bought the News Of The World album and that was that.”

What pushed you over the line from being a music fan to being someone who wanted to make music for a living?

“My friends and I used to do these air band things, with tennis rackets. We’d rock out in the bedroom to whatever records we had, like Judas Priest and Iron Maiden, and we started putting on shows. We built these fake guitars and wore these crazy clothes. We put on a show in the basement of someone from my father’s church, so there were all these church people there, right? We started out with The Hellion by Judas Priest and I remember the look of total fear on these people’s faces and I was thinking, ‘This is awesome!’ Then one day I was sitting round a campfire with my stepdad and he looked at me with this dumbfounded expression and said, ‘Why don’t you just learn to play for real?’ That was the moment! I saved up my money and bought my first real guitar, and that was the start of my journey.”

When did you realise that you an exceptional singer as well as a gifted guitarist?

“That’s a good question! I knew I could sing a little and I’d sing along with records or whatever, but it was when I really started to write songs and I couldn’t find a singer in the town where I lived, so I stepped out from just being a guitar player and sang for the first time. People started saying, ‘Maybe you should be singing all the time!’ and that was that.”

What was your first proper band?

“In high school I was in a band called Rapscallion. We’d been playing for all of six months so it was pretty awful, but it was fun! We had a blast. But my first real band was called Bittersweet. We were playing clubs and by the time we were in late high school we were playing six nights a week and four hours a night. That’s really where I cut my teeth.”

How did you progress from playing covers in clubs to where you are today?

Well, after Bittersweet I did a few different things throughout the 90s and then I got signed when I was with The Mayfield Four. We were more of a modern rock thing, like Jeff Buckley meets Radiohead or something, and it was very different from anything I’ve ever done since, but it was fun and it was a challenge. We opened for Creed on one of the tours when they were just beginning to really take off. That’s where it started. The guys from the band heard me and then five years later I get this call out of the blue. I hadn’t spoken with Mark [Tremonti, Alter Bridge/Creed guitarist] in years, so it was crazy how it all worked out.”

Is there a lot of pressure involved when you’re working with people as successful as the guys in Alter Bridge or Slash?

“They’re these huge phenomena that have had so much success. There’s always that strain that you’ll be under. That’s the hardest part about it but that’s just the way it is and you learn to live with it. I never thought when my stepdad encouraged me to learn the guitar for real that all these years later I’d be doing this. I was content just being a musician and teaching guitar and playing in bars and it’s all just gone this way and I’ve just run with it. I don’t take it for granted. This is the music business and it could all end tomorrow. I’m just taking lots of pictures and 30 years from now I’ll look back on it and say, ‘That was the best time of my life!’”

How did it feel back in 2008 when rumours started circulating that you were going to be the new singer for Led Zeppelin?

“It still sounds crazy! To me, they’re the alpha and the omega. They were considering doing another project after the reunion with Robert [Plant], and I was brought into the fold for a while. It was so surreal and so special because of what they mean to me. One of the best things was being able to say ‘Thank you for drawing up a blueprint for the rest of us!’ But it was never gonna be called Led Zeppelin. Someone said to me, ‘I hear you turned down the Led Zeppelin job!’ and I said ‘Really? You actually think I’d do that?’ Ha ha ha!”

Have you ever been asked to join Velvet Revolver?

“I think it’s been mentioned. There was a time a few years ago when they reached out. It was when Creed reunited, so I guess people thought Alter Bridge was done. I was flattered that they considered me, but knowing what the future held for Alter Bridge it would’ve been wrong to step into that. Velvet Revolver’s a machine and there’d be a lot of touring, and I didn’t feel it was the right thing for me to do. But now I’m touring a lot with Slash anyway!”

You spend most of your life on the road, so how do you cope with the life you lead?

“The hardest part is that it’s not a normal existence, at least compared to what I perceive as normal, and yet now it’s becoming normal. The last few times I’ve gone home, it didn’t really feel like home anymore because I’m gone so much! I’ve been gone for almost two years straight now. Home is my wife and my dog. My wife comes out with me, so that’s great, but in terms of home being a geographical place, I don’t feel the way I used to. I’m a nomad!”

What’s the most important lesson you’ve learned from this crazy rock’n’roll life?

“The music industry is brutal and there’s a certain amount of bad people in it, so I’ve learned to keep my guard up and to be a little tougher and to be a little more street smart. I come from a small town so there were skills I hadn’t developed when I first entered the business and I made mistakes, but you just have to grow a pair! Ha ha ha!”