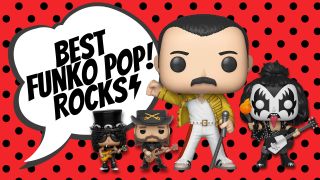 When it comes to collecting Funko's massive range of Pop! Vinyl figures, it's kinda hard to know where to start as the company are constantly delivering new figures all the time, covering just about every aspect of popular culture.

Looking for video game characters? The you're in luck as there are Funko figures for favourites including Tomb Raider's Lara Croft, Borderlands’ Claptrap or even Halo’s Master Chief.

Marvel's superheroes are well catered for too, as are Star Wars heroes and villains – and there are even a bunch from the world of animation.

Luckily, Funko haven't forgotten about music and they have a bunch, so you're pretty much guaranteed to find one of your musical heroes.

So with so many Funko Pop! Rocks figures available, we thought we'd help guide you through the maze with some of our all-time favourites. Have fun!

Of course we had to include the legendary Freddie Mercury of Queen in our best Funko Pop! Rocks guide. As you'll discover with the Funko Pop! Rocks Brian May, Roger Taylor and John Deacon– all the band are featured with their instruments.

However, it will come as no surprise that inimitable Freddie steals the show with these amazing Funko Pop! Vinyl figures: Freddie Mercury at Live Aid and the late Queen singer in his iconic Bohemian Rhapsody-era catsuit.

Reason to buy: It's Queen and Freddie. What's not to love?

Guitar hero Jimi Hendrix was one of the first musicians to be immortalised in Funko Pop! Vinyl form. The best one available right now – and it's worth remembering that these things sell out fast – is the Jimi Hendrix at Woodstock , featuring Hendrix with his red bandana and Fender Strat. We've no doubt that given the popularity of Jimi with music fans around the world, Funko will be releasing more figures soon.

Reason to buy: The best Funko Pop! figure for immortalising one of music's most influential artists.

Motley Crue were thrust back into the spotlight following the release of their hit Netflix documentary The Dirt last year. And while their live comeback has unfortunately been pushed back to the summer of 2021, fans can keep the band on their shelves with these splendid figures - decked out in their Shout At The Devil-era stage gear.

However, if you've seen or read The Dirt you'll know that even these Funko Pop! Rocks Tommy Lee, Nikki Sixx, Vince Neil and Mick Mars Vinyl figures should come with a health and safety warning... or at least some anti-bacterial wipes.

No round-up of the best Funko Pop! Vinyl figures for music fans would be complete without veteran rockers Kiss. Of course, with various lineup changes over the years, not every member of the iconic trailblazers is available. Personally, we're big fans of Peter Criss as he comes with his very own drum kit – and how about Gene Simmons trying to steal his thunder – complete with that famous Demon tongue and a lit torch ready to breath fire, which sadly isn't a bonus feature.

Reason to buy: Instantly iconic – even your gran will know who Kiss are!

Since getting at least some of the old band back together for their sprawling Not In This Lifetime tour, Guns N' Roses have reclaimed their position as rock's most popular band – and that hasn't escape Funko's attention either.

Though the sunglasses-clad Duff McKagan figure is reproduced from more recent times, the Slash and Axl Rose figures, replete with omnipresent cigarette and mic stand respectively, are straight out of their late 80s and early 90s heyday.

As good as this trio is, it would be amazing in Funko were to create original members Steven Adler and Izzy Stradlin to join them.

Reason to buy: Reunite GNR on your shelf more easily than the band ever managed.

He's the most recognisable member of Aussie rock legends AC/DC and so he rightly has his very own collectible figure in the form of the Funko Pop! Vinyl Angus Young, which shows the Glasgow-born guitar god doing his renowned duck walk and brandishing his stunning red Gibson SG.

Rumours of a Funko figure featuring Brian Johnson hitting a bell while simultaneously grabbing an inflatable Rosie have, er, just been made up. By us.

Reason to buy: It's the best Funko Pop! Vinyl for hitting that Highway To Hell.

Given Slash has been immortalised with a cigarette in his mouth, we're surprised that late, great Motorhead icon Lemmy isn't seen here swigging his signature Jack and Coke. Apart from that, this warts-and-all Lemmy Kilmister figure in his trademark uniform, complete with bass guitar, is as good a likeness as you'll get in the Funko Pop! Rocks range.

Reason to buy: A playful way to celebrate the late, great hell-raiser.

Any kind of Funko Pop! Rocks range wouldn't be complete without thrash giants Metallica. The band's current lineup has been immortalised by the Funko team, so we can now have our very own mini-versions of James Hetfield, Lars Ulrich , Kirk Hammettand Robert Trujillo.

And though you can't get Jason Newstead or Cliff Burton just yet, you can complete the set with the Funko Pop! Lady Justice from their classic ...And Justice For All album and subsequent tour where she famously fell to pieces onstage.

Reason to buy: Simply because it's the Best Funko Pop! Rocks for Metallica fans.

Due to leaving the band in 2015 in order to spearhead extra-terrestrial investigations, which appear to have had some success, Tom DeLonge has, for the time being, forsaken his chance to have his own Funko Pops figure. Former bandmates Mark Hoppus and Travis Barker have no such problem, which is why they're featured right here.

And, because of Travis' ever-expanding tattoo collection, it means you may have to break out the felt-tip pens and your own hand-drawn doodles to keep him up to date!

Reason to buy: For paying homage to one of pop-punk's finest bands.

We'll never know what the anti-celebrity leader of Nirvana would have made of being immortalised as a wee Pop toy, but that doesn't stop the Funko Pop! Rocks Kurt Cobain being a very cool addition to your ever-expandeing collection. There's also a Kurt Cobain MTV Unplugged figure, with Kurt in his cardigan and playing an acoustic guitar. We particularly love this one as it takes us right back to that famous performance.

Reason to buy: Because you own every other bit of Nirvana merch.