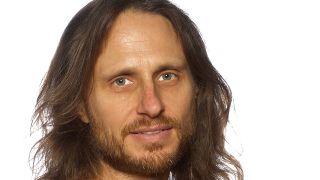 They knew about my singing Yes material in a tribute band called Roundabout. I left in 2009 to join Glass Hammer, and proceeded to do original progressive rock. Then Paul Silveira, Yes’ manager, gave me a call.

Have you spoken to Jon Anderson?

No, I never have had the pleasure of meeting him.

Would it be weird, a bit like seeing your double?

I hope it wouldn’t be weird because he’s been a hero of mine for so many years. He’s kind of a father figure.

Do you think he secretly hates you, or wishes you good luck?

Someone told me, who has known him for decades: “Jon would really like you. If the two of you were able to be together, you guys would get along.” And I’ve seen him speak favourably of Benoît David [Davison’s predecessor] and been somewhat understanding that the guys have to make a living and be out touring. So I hope he would be equally sympathetic with my situation.

Do you marvel at Yes’s lengthy, labyrinthine history regarding internecine squabbles?

For the most part there’s a mutual respect and that’s what I admire most. They know they need one another to go forward. Yes, there’s a history of discord, but there’s also a way of knowing when to compromise and express feelings of concern. They’re well versed in the Yes dynamic.

Have they gone from heroes to regular work colleagues, or have you retained your teenage sense of awe?

It’s really a bit of both. It’s never become the norm, but you do get more familiar with one another. Then sometimes we have time off and I have to pinch myself. They’ll always be heroes to me.

You’re only 43 years old. Is there a generation gap?

Not really. It’s amazing how open-minded they are. I never get the impression they’re locked in their era.

Absolutely. We really get along as people. We have a laugh and there’s stimulating conversation. I just keep my ears open and learn as much as I can. They talk mostly and I listen. But since we did the new album together, we have more in common.

Did you write all the lyrics?

I did most of them. Steve [Howe] writes a lot and Chris [Squire] wrote some things.

Did you deliberately write in an Anderson-ish way?

I wrote the words I would have anyway. I went with the flow. And in the end, very little of it was changed.

How did it work?

Chris and I started right away, in 2012. I was over at his home and we were composing together from early on. So songs developed over the course of a year and a half.

What reaction did your words get?

They were very appreciative that I could offer so much in that area, and they liked that it was so refreshing. You could say they’re very much in the universe of Yes, but it’s also a unique take.

Are you nervous about Yes diehards’ reaction to the new tracks?

It’s crossed my mind a few times that there’s some pressure here. People have big expectations and I don’t know if I can live up to that. But we can’t control those things in life.

Have you taken flak from fans?

No, I’ve never heard a cross word. I’ve seen a few [negative] things online. Like, “No Jon, no Yes.” That kind of thing. “No one can measure up to Jon Anderson.” “Why isn’t Jon there?” More reflective of why he isn’t present, rather than, “Who is this imposter?”

Do you think Benoît David had already absorbed a lot of the critical attention?

Do you know if he’s happy with you being his replacement?

I wrote him an email after I joined the band, just so that he knew I admired what he had done and hoped there would be no hard feelings. I didn’t want him to think I had anything to do with it [replacing him]. I wanted to clear the air and get his blessing. And he wrote me back a nice email saying everything’s cool.

You recorded new album Heaven & Earth in Los Angeles with Roy Thomas Baker. Was there any talk of how the sessions compared with the fabled 1979 Paris sessions?

They call those the Pub Sessions, for obvious reasons! I don’t know too much about them – you’d have to ask one of the band.

What is your opinion of the post-‘classic’ albums, the ones from the last 25 or so years?

I really like The Ladder [1999] and Magnification [2001]. The Ladder has a real fresh energy. But they always did. Yes were never a 70s band just going through the motions. There was always a vitality, and a sense of current significance.

Where do you think Heaven & Earth will fit in the Yes pantheon?

I find it extremely different to [2011’s] Fly From Here, and that’s really exciting. There’s nothing familiar about it. It’s unknown territory. It’s very Yes-like but there’s something very unique about it.

What was the talk among the band when it came to the new album? Was it of the “This is the best thing we’ve done since Going For The One” variety?

I just remember everyone being enthused and not comparing it to any other time. I never really sense that they do that. If anybody did that, it would be me: “Oh, let’s do something like this song or let’s touch on something from Fragile.” Whereas they’re always moving forward. That’s what has kept this band alive.

How would you describe this new record?

It’s really varied. There’s a nice acoustic, intimate side, and a lot of musicality, with instrumental phrases that go throughout the middle of songs where the band are united. It’s definitely got catchy melodies and, just as the title signifies, there’s a transcendental quality reflective of metaphysics, as well as more earthly moments that touch on relationships. It’s across the spectrum.

How has playing the ‘three albums in full’ concerts been?

Great. It was really important for me to come to Britain and present myself, for our first shows in the UK with me fronting the band. I was so relieved. I feel like I’ve had a breakthrough and connected with the audiences.

So no death threats?

This was published in Prog issue 47

Read the review of Yes live at the Royal Albert Hall