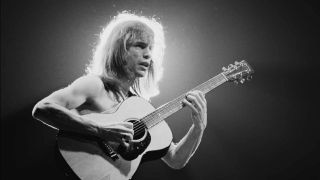 Yes guitarist Steve Howe has an abiding passion for music.

“Obviously I love rock’n’roll. Because that’s what I essentially play. But I also love all types of music. As long as it’s real, then I enjoy it. From pop to classical, it all interests me.”

When it came to choosing 10 songs which altered the shape of his life, he admits to having a genuine challenge.

“The thing with these lists is that I tend to change my mind a lot. And mess around with what should be included. But these are 10 records which I believe have been constant in my life. So, I suppose it’s fair to say that they’ve had a profound impact – and still do. What I’ve done is list them chronologically, which reflects the way they came into my world.”

“You know, I heard this when I was a child, before I even knew what a guitar was. My parents had it on a 78. Mary Ford’s vocals were fantastic, and you can also hear every cliché that Les Paul ever invented right here. But he did these before anybody else. It’s one of those recordings which make a big impression on me at a very early age.”

“I could have chosen anything from his album The Incredible Jazz Guitar Of Wes Montgomery, but this track really does it for me. It encapsulates what he was able to do. I was actually lucky enough to see him live when I was 16 at Ronnie Scott’s. That was an experience.”

Chet Atkins – The Girlfriend Of The Whirling Dervish (1962)

“I could have chosen a lot of different songs from Chet Atkins. He’s my favourite all round guitarist. There are those in different areas of music who are better than him, but nobody had the same ability when it comes to being across the board. For me, it was an education to listen to what he did. I was lucky enough to meet him a few times, and have everything he recorded.”

“This is from the start of his electric period. Don’t get me wrong, I love his acoustic stuff as well. But for me this song captures what the 60s were all about. It was pre-hippie, but really encapsulates what this period came to mean. The lyrics, the sound, the vocals… it was all new and exciting.

On the subject of Dylan, I know people claim that when Dylan went electric, there were fans booing him at gigs. But I never thought that was because he’d changed style, but due to the fact that he was just standing onstage tuning up and not singing. That’s my theory anyway!”

“Look, I love what The Beatles did, but for Keith West and me when we were in Tomorrow, this was psychedelic heaven. Roger McGuinn was superb on guitar, and whenever I heard this, it just represents everything about this year meant to me.”

“Whenever I mention that I love Abba, people are amazed. They are very unimpressed. ‘How can you like pop like this?’, they ask. But the fact is that I think Abba were a great pop band. You listen to Agnetha’s vocals and they’re wonderful, and so is the production.

"I could have gone for something from their final album The Visitors, because that’s so dark and proves there was more to this band that lightweight pop. But Winner Takes It All is a song I’m always happy to have in my head.”

“Like Abba, people are shocked when I tell them that I love Go West. They cannot believe I appreciate pure pop. But I do. Like any other form of music, when it’s done well pop is amazing. Go West are a classy band.

"And in Alan Murphy they had a brilliant guy on guitar; we worked together on a few sessions. I could have picked any number of Go West songs. The King Is Dead, From Baltimore To Paris… but the remix of this song is so dramatic.”

“This was one of those songs where Peter Gabriel threw out the so-called rule book, and decided to do whatever he wanted – again! You can hear Tony Levin’s marvellous playing in the background throughout this, and because it’s so unusual and off the wall this stays with you.”

“For me, this is the best band of the past 15 years. Alison Krauss is such a fine singer, violinist and producer. And she has a great ability to pick the right songs and then arrange them to suit her and the band. While the studio version of this song was fine, it’s in this live state that New Favorite comes into its own.”

“This was the band who rekindled my love for rock’n’roll when I heard them. They are crazy guys, but came up with some wonderfully melodic songs. When I hear this, it reminds me what first got me excited about rock’n’roll. And that means a lot to me now.”