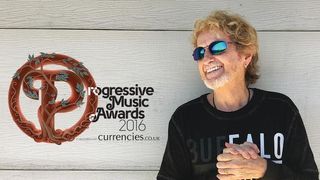 Jon Anderson will be presented with the Prog God award at this year’s Progressive Music Awards, in association with currencies.co.uk, which will be held at London’s Underglobe on September 1. This very special honour is given to musical innovators within the world of progressive music and sees Anderson joining former bandmate Rick Wakeman, as well as Ian Anderson, Peter Gabriel and Tony Banks, in collecting the prestigious prize.

“After all these years, it’s just wonderful to be getting this very special award,” said Anderson, upon being told the news.” Music has guided me along to this point in my life and I’m forever excited about the new and progressive musical adventures I am given by the gods of music. Making music is like breathing to me, and I am blessed to be able to create music every day. A very grateful and humble thank you.”

The British vocalist officially began his musical career in the early 60s with The Warriors, before briefly joining Mabel Greer’s Toyshop in 1968. It was there that he met Chris Squire, with whom he went on to form Yes soon afterwards. Anderson, who has one of the most recognisable voices in progressive rock, soon became the driving force behind one of the movement’s biggest bands: Yes have sold more than 30 million albums worldwide. Although Anderson left Yes in 1980, he returned three years later to front the hit album 90125 and remained the band’s on/off vocalist until 2008. To date, the former frontman has recorded more than 15 studio albums with the band and has enjoyed a successful solo career, spawning an additional 14 studio albums so far, as well as collaborations with King Crimson, Vangelis and Mike Oldfield. More recently, he’s teamed up with Jean-Luc Ponty as AndersonPonty Band and with The Flower Kings’ Roine Stolt on the joint album Invention Of Knowledge – the latter is also nominated for the reader-voted Album Of The Year at this year’s awards.

Jerry Ewing, Editor of Prog Magazine, says, “I suspect I speak for many Prog readers when I say that Jon Anderson has been at the very forefront of the progressive world that we’ve grown up with over the past 50 years. Either as a singer with the truly groundbreaking Yes, or as part of his series of albums with Vangelis, or as a solo artist in his own right. In today’s musical world, his new album with Roine Stolt and his linking back up with Trevor Rabin and Rick Wakeman continue to thrust him to the forefront of the genre and send ripples of delight and intrigue amongst his millions of fans. He remains one of progressive music’s key figures and a more than fitting recipient of the accolade Prog God.”

There are 14 categories in total with seven voted for by the readers of Prog Magazine. Voting for the awards is open now at www.progmagazine.com/awards. This year sees Big Big Train, Dream Theater and King Crimson lead nominations with all receiving three nominations each, and going head to head for Live Event and Band/Artist of the Year. Ten artists including Steven Wilson, Opeth, Riverside and TesseracT all receive two nominations each in what looks to be one of the most unpredictable years yet.