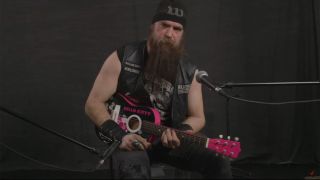 A video of Zakk Wylde playing N.I.B by Black Sabbath on a Hello Kitty mini-guitar has been released.

Loudwire filmed the guitarist’s acoustic cover of the 1970 song by Sabbath, who he refers to as “the cat’s pyjamas.” View it below.

Wylde previously said of his days touring with Ozzy: “I’ve always loved, especially during the drinking days with Oz, when I’d be touring with the boss, after we got done doing a show we’d jump in the submarine and roll on to the next town.

“I’d sit up the front with whoever was driving and we’d all meet up there and drink cocktails, listening to The Eagles, Neil Young, Creedence – solving the problems of the world, talking about everything.”

The axeman recently issued his single Sleeping Dogs from his record Book Of Shadows II, due out on April 8. The record comes 20 years after his first Book Of Shadows release.

Wylde is currently out on the road on the Experience Hendrix Tour across the US. He’ll hit the road with Steve Vai, Yngwie Malmsteen, Nuno Bettencourt and Tosin Abasi under the Generation Axe banner in April. He’ll then return to Europe for a string of shows.