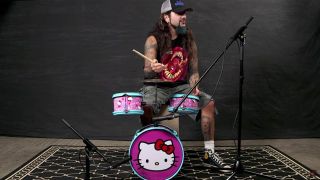 Mike Portnoy has proved his versatility by playing a string of rock classics on a tiny Hello Kitty drumkit.

The in-demand drummer hooked up with Loudwire for the stunt, which sees him trying to perform Slayer, Kiss and Rush hits on the three-piece child’s kit.

As he walks up to the stage, Portnoy jokes: “What the fuck, where is my tour manager? I specifically requested the Pokemon kit. I never play Hello Kitty. Obviously the fucking guy did not get the rider. And a single pedal? I’m supposed to be doing Slayer tunes on this thing. But I’m an artist and a professional. I will rise above.”

He goes on to play the intros to Strutter and Love Gun by Kiss, Criminally Insane and Raining Blood by Slayer and Rush classic YYZ.

Portnoy also plays the intro to Let Darkness Fall by supergroup Metal Allegiance, who released their self-titled debut album in September. It features Portnoy, Alex Skolnick and David Ellefson, along with a string of guests.