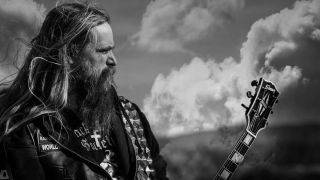 Zakk Wylde has confirmed his solo album Book Of Shadows II will be released on April 8.

The record – which marks the 20th anniversary of the first Book Of Shadows release – will be issued via Spinefarm Records.

Wylde took part in a discussion about the album with Brad Tolinski for AOL. It can be viewed below.

The former Ozzy Osbourne guitarist says: “I’ve always loved, especially during the drinking days with Oz, when I’d be touring with the boss, after we got done doing a show we’d jump in the submarine and roll on to the next town.

“I’d sit up the front with whoever was driving and we’d all meet up there and drink cocktails, listening to The Eagles, Neil Young, Creedence – solving the problems of the world, talking about everything. I’ve always loved the mellow stuff.”

Sleeping Dogs will be the first single from Book Of Shadows II and is expected to be released in the next week.