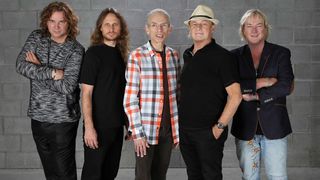 Yes have announced that they’ll release a new live album later this year.

Titled Topographic Drama: Live Across America, it was recorded across 12 dates on the band’s US tour in February and will arrive on November 24 via Rhino Records on 2CD and 3LP.

Each night, Yes performed all six tracks from 1980’s Drama, sides one and four from 1973’s Tales From Topographic Oceans plus a selection of fan favourites.

A statement reads: “Rhino salutes the influential progressive rockers who were inducted into the Rock And Roll Hall Of Fame earlier this year, with the new live album Topographic Drama: Live Across America.

“The music will be available on 24th November as a double-CD and a triple-LP. Both versions feature detailed cover art designed by the band’s longtime collaborator Roger Dean.”

Topographic Drama: Live Across America is now available for pre-order on CD, vinyl and digitally. Find the cover art and tracklist below.

Earlier this month, Yes announced a 2018 UK and European tour to celebrate the band’s 50th anniversary which will get under way at Bristol’s Colton Hall on March 13.

Guitarist Steve Howe said: “We want to mark this anniversary with a tour that encompasses some of our best loved work – we want to play things we enjoy, maybe songs we haven’t done in a while.”

Yes: The Real Story Behind Tales From Topographic Oceans