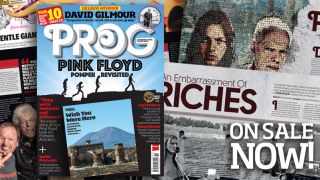 Prog 80 is on sale today, featuring Pink Floyd on the cover. With David Gilmour about to release his new Live At Pompeii film, which features his 2016 return to the celebrated ancient site, we thought it was the ideal time to look at Pink Floyd’s own film from 1971. We speak to director Adrian Maben to get the inside story of Pink Floyd at Pompeii, plus we have an exclusive interview with David Gilmour about his return, the new film and his future musical plans. 17 pages of Floyd and Gilmour for your delectation…

Carl Palmer - Ahead of being crowned Prog God at this year’s Progressive Music Awards, Carl discusses his epic career.

Justin Hayward - The Moody Blues frontman chats about his whole career in The Prog Interview.

Threshold - The UK prog metallers discuss their new album Legends Of The Shires and the return of singer Glynn Morgan.

Matt Stevens - gives us a glimpse into his proggy world

Laibach - we ask them the ‘how prog are you?’ question

Plus IT, Lunatic Soul, KOYO, Galahad, Circu5 and more on the accompanying CD

Get this issue here or subscribe to print or digital packages here.