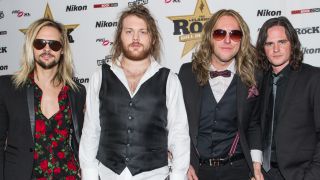 We Are Harlot (Image credit: Getty)

Danny Worsnop’s We Are Harlot bandmates say they were “blindsided” by the singer’s return to Asking Alexandria.

Worsnop has rejoined the band he left around 18 months ago after the man who was brought in to replace him, Denis Stoff, supposedly left Asking Alexandria in the lurch by cutting communication with them.

Now We Are Harlot insist they “will not be sidelined in any way” by Worsnop’s return to Asking Alexandria.

They say: “At this point we will wait to see what happens and we will keep our fingers crossed along with all of you. But rest assured, Harlot will not be sidelined in any way and know full well that you will have a new Harlot album in your hands by February. One way or another.

“So just like everybody else, we were pretty much blindsided by all this in the same way. We saw and heard bits of things but found out in about the same way you all did.

“Things change fast in the music business and many times a decision is made very quickly that changes everybody’s schedules and futures. Everybody in the music Industry – bands, labels, managers, agents, lawyers, you name it – are doing what they can to survive.”

They continue: “Package tours, VIP experience, album sales linked to ticket sales, get an original line-up back together (hmmm…) the list goes on and on. Everything that is happening now is fully understandable from behind the curtains.

“We’ve all seen this story before. Here’s the biggest problem. All this comes at the expense of one person, wait, millions of people – you the innocent loyal fan. And to us.. that sucks!

“Because we in Harlot started this band cause we were, and still are, the fans! We are no different than you.

“And, this is the state of the music business at this juncture. It is daily becoming increasingly more and more difficult for artists and labels to make enough money to live, let alone tour and make albums.”

Footage of Worsnop’s first gig back with Asking Alexandria surfaced this week, and an official video clip followed later.