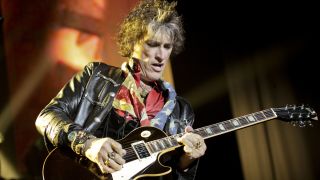 Aerosmith’s Joe Perry is to receive the Les Paul Award for creative excellence.

The veteran guitarist will be given the prize at the 32nd NAMM Technical Excellence and Creativity Awards in Anaheim, California on on January 21.

Named after guitarist and inventor Les Paul, the prize is presented to people who have “set the highest standards of excellence in the creative application of recording technology.” Past recipients include Slash, Todd Rundgren, The Who’s Pete Townshend, Steve Vai, Fleetwood Mac’s Lindsey Buckingham, Brian Wilson, Peter Gabriel and Stevie Wonder.

Perry tells NAMM: “Anytime my name is mentioned in the same sentence as Les Paul, it’s a huge honour. Getting an award bearing his name is the icing on the cake.”

Les Paul Foundation executive director Michael K Braunstein says: “Joe Perry was a friend of Les Paul’s and is undoubtedly one of the most innovative and talented musicians of our time.

“His ability to push boundaries of the electric guitar with his signature sound and deft playing ability embodies the true spirit of what Les Paul and the award given in his name stands for.”

Aerosmith producer and engineer Jack Douglas will also be inducted into NAMM’s Hall of Fame at the event, which recognises the most accomplished producers and audio technicians in the industry.

Other artists who have been nominated for awards this year include Prince, David Bowie, Keith Richards, Paul McCartney, Radiohead, Sting and Gabriel. Find the full list here.

Perry recently recently appeared as guest diner on cooking show Hell’s Kitchen, which is hosted by celebrity chef Gordon Ramsay. The guitarist also said last month that his solo album was “in the can.”