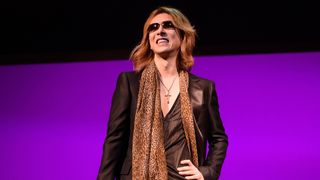 X Japan mainman Yoshiki guested with Golden Bomber at the Japan Visual Summit 2016 at the weekend.

Yoshiki played drums with Golden Bomber as they performed their hit May May She Kutay, which translates as “effeminate guy.”

“Of course Yoshiki is a legend, and we accept everything he says. It was like a dream come true, and of course the audience are really excited, but we’re the ones who are most excited – we’re like kids in a candy store.”

A video showing Yoshiki onstage with Golden Bomber can be viewed below.

X Japan also performed at the event and were joined onstage by Gene Simmons for a version of Kiss classic Rock And Roll All Night.

This year’s Classic Rock Roll Of Honour is being held in Japan for the first time. It takes places on November 11 at Ryogoku Kokugikan Stadium in Tokyo – the spiritual home of sumo wrestling.