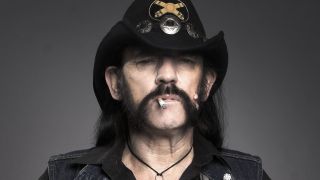 Motorhead icon Lemmy is still alive after making a “blood sacrifice pact” with the Illuminati, it’s been claimed.

A conspiracy theorist who describes himself as an “Illuminati watcher” argues that Ian Kilmister didn’t die in December 2015, but “ascended into the heavenly realm.”

The Illuminati is said to be a group of supernaturals who secretly run the world for their own purposes. Although a real secret society with the same name once existed, there’s no firm evidence that the modern organisation is real.

The “watcher” tells the Daily Star: “Lemmy signed up for the ultimate pact – he signed his soul to the devil in order to achieve fame and fortune.

“I’m not trying to take away from his skills, abilities, or talent. I’m saying that the game is rigged. You have to sign over in order to get access to high-profile celebrity status.”

He adds that “ascended masters” including Lemmy “die but they don’t really die. They actually make it, and ascend into the heavenly realm.”

The “watcher” argues that the Hollywood Vampires’ Lemmy tribute at this year’s Grammy awards proves a deal had been cut, because otherwise the mainstream showbusiness industry would have ignored him.

He also claims that the four Xs on on the cover of Motorhead’s final studio album Bad Magic refer to the secret power of the number four, and not the band’s 40th anniversary.

He points out that Lemmy died four days after his 70th birthday, that the album was launched four months before his death, and that he’s said to have drawn his last breath at 4pm.

And he says the words to Motorhead classic Ace Of Spades provide another clue. “The lyrics suggest that Lemmy is saying, ‘Look, I signed a deal with the devil. I’m just going with the flow, trying to get into this music game,” he says.

“We see this high-profile ritual at the Grammys, where they’re saying he has moved on. He has fulfilled the contract.”

The Daily Star notes: “Creepy coincidence or seriously stretching the truth? Either way it would probably give Lemmy a good laugh.”

In the last interview before his death, Lemmy was asked if he planned to keep performing. He replied: “After death? No – I’ll have to stop then, I think. You never know… I could haunt somewhere.”

Lemmy is laughing, and he’s proud of us, says Motorhead’s Mikkey Dee