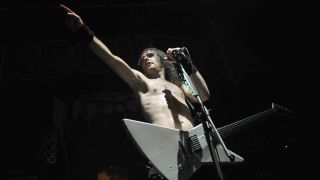 Airbourne frontman Joel O’Keeffe says he’d have jumped at the chance to step in for Brian Johnson in AC/DC – but adds that Axl Rose “did a great job.”

When Johnson was ordered to stop touring and AC/DC said they would bring in a replacement to complete their Rock Or Bust tour, some fans called for the band to consider O’Keeffe.

In the end, Guns N’ Roses vocalist Axl Rose was brought in and went on to impress despite early scepticism.

Last week, O’Keeffe’s brother Ryan said Joel would have been “humbled” to be asked to join fellow Australians AC/DC, and now the singer has spoken about it himself.

Joel O’Keeffe tells My Global Mind: “I wasn’t called up but saw a lot of stuff online about it. We were in the studio at the time and I was really humbled by the online stuff that came out with me as a good fit.

“If the call had come through, I would have done it. I think Axl Rose did a great job, sung all the songs really well, and put on a great show. He has Brian’s range and the Bon Scott’s unpredictability and charisma.

“It was rock or bust…and it wasn’t bust.”

Airbourne recently released an explicit video for their track Rivalry which features on their fourth album Breakin’ Outta Hell which launched last month.

They are currently on tour in support of the follow-up to 2013’s Black Dog Barking.