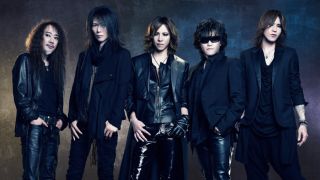 The release of the group’s as-yet-untitled sixth record was put on hold earlier this year when guitarist Pata was taken to hospital with a “life-threatening” condition.

While X Japan have still not given an update on when the album might surface, Yoshiki tells the South China Morning Post it might not connect with Western audiences in the way they hope.

He says: “There are still a lot of challenges ahead. I don’t know how many people in the West are ready for artists such as us, coming from the East.

“There are still walls between the East and the West, a culture barrier. Being an artist from Asia, to go overseas and to perform in Western countries, it’s not easy.”

But Yoshiki hopes the album can help beat a path towards the West for other Asian artists. “We want to break that wall for new artists so they can become popular anywhere in the world,” he adds.

Meanwhile, the X Japan documentary We Are X will be released in New York and Los Angeles on October 21, with a nationwide roll-out to follow later.

Tim League, of distributors Drafthouse Films, says: “You will not believe the trials and tribulations that the arena-filling, mega-band X Japan have faced in their 30 year career.

“This documentary will leave you equally breathless and uplifted. It is the best music doc of the year, and we are honoured to bring it to American audiences.”

This year’s Classic Rock Roll Of Honour will be held in Tokyo on November 11 at Ryogoku Kokugikan Stadium – the spiritual home of sumo wrestling.

10 of the best metal bands from Japan