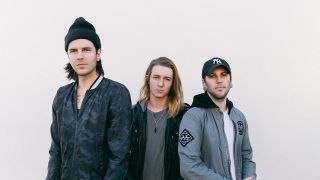 It’s the lead single from the band’s self-titled new album which was released at the end of February, and is the follow up to 2015’s Everything That Got Us Here.

Frontman Wade Waters told TeamRock: “This track tells a somewhat descriptive story of what I was going through at the age of 14, at the beginning of my parents’ divorce, and how it was affecting me. Finding out how broken my parents were at such a young age really took a massive toll on me and sent me into kind of a dark place where I felt like I was gonna be stuck for a long time.

“Every kid looks up to their parents at an age like that and mine were always the ones who said divorce was never an option until the day finally came. As the track goes on and makes its way into the bridge, you notice a sudden change of feeling and acceptance of me deciding to take it for what it is and move on and grow from it, which is all you really can do.

“As I age more and more every day, I realise that if they hadn’t separated and I didn’t have to go through all of the hard times and struggles I was forced into, I probably wouldn’t be half the man I am today. To move on is to grow.”

SECRETS are currently on a world tour, which will be stopping in the U.S., Canada, South Africa, the Philippines, Australia and New Zealand. Head to their official website for more information and complete dates.