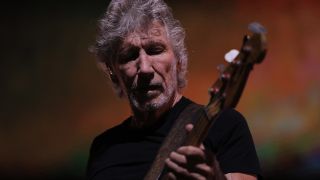 Roger Waters has released another clip from his upcoming Us + Them concert film.

Last week the vocalist and bassist shared a clip of Pink Floyd's 1977 track Pigs (Three Different Ones) – and now he’s released a snippet showing him and his band playing The Dark Side Of The Moon classic Us And Them, which can be watched below.

Us + Them will premiere at the Venice International Film Festival on September 6. The film will then be screened around the world on October 2 and 6 through Trafalgar Releasing.

The footage for the two-hour film was captured during Waters' four-night stay at Amsterdam's Ziggo Dome on June 18, 19, 22 and 23 last year and was co-directed by Sean Evans.

Waters said: “I’m so looking forward to the launch of the movie in October. Us + Them is not standard rock'n'roll fare. Some in the audience may 'yee ha!’ which is OK, but many will weep. That is what I hope for.

Evans added: "This is a great film, an amazing performance delivered with care, emotion and meaning. Didn’t think it was possible, but I believe we’ve outdone The Wall."

To find your nearest screening, visit the film’s official website.