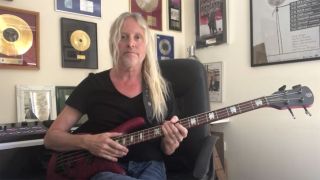 Wilson released Personal Shopper in March, which features a guest vocal from Elton John. The song is taken from Wilson's next studio album The Future Bites, which has now been delayed until January 2021. Wilson also invited fans to have a go at remixing his new single last month.

Beggs plays bass on the new album and has treated fans to a run through of the bass parts of Personal Shopper, in his own inimitable style. You can watch the video in full below.