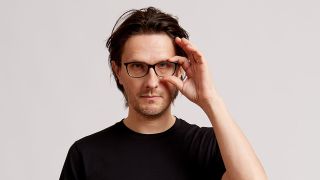 Steven Wilson has pushed back the release date of his new studio album The Future Bites.

The follow-up to 2017’s To The Bone was scheduled to launch on June 12 through Caroline International, but due to the current challenges facing the music industry amid the coronavirus pandemic, it’ll now appear next year on January 29.

Wilson explains: “As with many of my albums, The Future Bites is not just about the music, it's a high concept project which involves design, artwork, video and a tour production, all on a grander scale than anything I've attempted before.

“However, due to the pandemic, there are unprecedented challenges, ranging from manufacturing issues – particularly in relation to the elaborate deluxe edition – and the uncertainty facing record stores as coronavirus forces them to close their doors, to being unable to shoot most of the video material I planned.

“It's therefore with a very heavy heart that I reluctantly need to postpone the release of The Future Bites until such time everything can happen as intended. This will now be January next year, with new music and video starting to be issued again around October.

“In the meantime the pre-order page for the various editions of the album will remain online. Myself, management, agent and promoters are monitoring the situation regarding the live shows scheduled for this autumn. Should events change we will let everyone know as soon as we do.”

Wilson adds: “I understand that this may be disappointing news, and to no one more that myself, believe me. I worked on the music and background of this project for the last two years and was thrilled to finally be able to launch it.

“The response to Personal Shopper last month has been phenomenal, and I was looking forward to unveiling more over the next few months in the build up to the release of the album. But alas due to the current circumstances it was not to be.

“I sincerely send everyone reading this a message of good health, and I hope that one day in the not too distant future we can once again focus on things like music, which even if it isn't strictly essential seems to somehow makes life more worthwhile.”

The Future Bites was recorded in London and co-produced by Wilson and David Kosten, while Wilson – in conjunction with Baby and Crystal Spotlight – created an online store designed to be “accessible and addictive to anyone from the casual fan to the hardcore collector.”