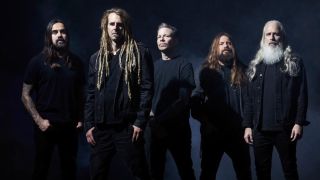 Lamb Of God have shared their entire set from Chicago’s House Of Vans.

The band live-streamed the performance on Friday night, with the set now uploaded for those who missed it the first time around.

Randy Blythe and co. played a total of 13 songs – including their new single Checkmate, which made its live debut. Watch the full show below.

Checkmate will feature on Lamb Of God’s upcoming self-titled studio album. The follow-up to 2015’s VII: Sturm und Drang will launch on May 8 through Nuclear Blast.

Speaking about the song, guitarist Mark Morton explained: "Checkmate brings together all the components of the Lamb Of God sound that we’ve been developing over the last two decades, but with the ambition and ferocity that comes with the start of a new chapter for our band.

"Re-energized and reignited, this is Lamb Of God 2020. We’ve never been more excited.”

The record will also be Lamb Of God’s first with drummer Art Cruz, who has replaced Chris Adler.

Lamb Of God will return to the UK in April for a handful of shows with Kreator and Power Trip and then hit the road with Megadeth,  Trivium and In Flames this summer.