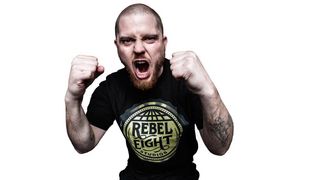 \ufffcJamey: grabbing life with both hands

Bummed out by the world going to shit? We got Hatebreed’s motivational maverick to help us help you keep that chin up.

“Now my daughter is in her teens, she gets straight As at school and she’s also got a job, so I really feel that my work ethic and positive mental attitude has rubbed off on her. I always said to her that if she got a high school diploma then she would have done more than me, and I feel like her drive is inspiring to me and, having not had a college education, that maybe I should go and get a diploma or start an online course or something! So it’s that feeling of, ‘It’s never too late’; I could do that or I could write a book or make a film! It’s realising that no matter what your situation is, you have options.”

“All the diplomas and achievements you make in your life always mean much more when you’ve got a supportive family behind you. Some people don’t have that family unit, but that doesn’t mean that you can’t have a close bond with your friends. That kind of community will always pull you through; there are a lot of really successful people that are unfulfilled because they don’t have that support network. So never take that for granted.”

USE THE POWER OF MUSIC

“I remember being a teenager and running the gamut of feelings you go through as an adolescent, whether you’re sad, you’re angry, you’re lonely, you’re jealous, you’re afraid, and music is the soundtrack to that time. You place emotions on certain albums and songs that got you through it. Here we are 20 years later and people continually come to the shows and tell me how certain records of ours were there for them during hard points in their lives, and it’s a cyclical power. Because the fans, and the support of the fans coming to the shows and buying the t-shirts, buying the albums, spreading the word… that makes us feel empowered to keep moving forward.”

“Life is not a practice run. Before you know it, half of it has passed by, and you don’t want to be looking back wishing you had made those choices to benefit you or your friends and family. You need to put those fears beside, but that’s a hard thing to do. Maybe that’s why my lyrics are always in the drill sergeant mode, because I have to constantly tell myself! I think with anything great in life you need repetition, and you need reinforcement to give you that push. And, although sometimes you do get that from someone with an outside perspective, you can’t rely on anyone helping you at this life that you get that one shot at.”

DON’T BE CONTROLLED BY EMOTION

“Everybody has problems, but we create our outside reality. So while you might feel like you can’t control the external things in your life that are bringing you down, you can control your response to those situations. So, because you have the power over your inner reality and your inner thoughts, you’d be surprised to see what a difference positive thinking can have on your external world. Before the Supremacy album I was dealing with thoughts of, ‘How can we top Rise Of Brutality, with switching labels and more lineup changes?’. We were really up against a lot. I’d write emails and I’d be all amped up, but then I’d take a moment and put that email in the draft folder, or delete that angry text. Let’s not be too hasty, let’s rewrite this and take a step back, come at it from a different angle. And you realise that you’re creating a lot of your own problems yourself. Sometimes it’s good to press reset.”

“I will always go for a run and put my playlist on to clear my head and just find the simple pleasure in the things I enjoy. I usually go for some sort of midday meditation, or go for a hike. Yesterday I went for a hike and I got to the top of this little local mountain, and there is this clearing and I looked out and I was just totally in the moment. So when I got back to my office and dealt with my business I was able to look at it in a clearer light.”

“As you get older you start to see political decisions more clearly, because you can see the people that it is affecting. I have a grandmother who would be affected by government assisting and being able to qualify for certain government programmes, and so I take an interest in that, I look at things from her point of view. You want to know that your family are going to be protected. So in that sense I‘ve been taking a more political interest. And I know that to some people it can be daunting, which is why I think that you have to start by looking locally, not globally. See what it is that your parents or your brother or your friends are going through and how it relates to them. People love to let politics make their blood boil, and they get emotional, but if we don’t learn the hard lessons that are to be learned about this stuff then there can be no moving forward, and that can be said about local policy, national policy, global policy. But the people do have the power.”

GET SOME NYHC IN YOUR LIFE

“There are so many good hardcore records that still get me pumped to this day. Cro-Mags’ Age Of Quarrel is a good one, because if you read those words then they could have been written this year. That’s an album that is empowering when you’re looking at the world from an outsider’s perspective, but it’s also got these introspective songs about bettering yourself on it, too. I also love Hold It Down by Madball. I must have played that 150 times on the first Hatebreed tour. There was a time, between about 2000 and 2002, when we were doing about 200-300 shows a year, and that was the record that kept me going through that unbelievably gruelling touring schedule. I mean, man, there are so many jams on that record. If that record doesn’t get you pumped then I don’t know what will.”

HAPPINESS IS YOUR CHOICE

“Everything is a choice. Happiness is a choice, sadness is a choice, and you have to choose one or the other. And sometimes you gotta just weigh up the pros and cons, and sometimes that choice can be debilitating in itself. If you don’t reset your thinking, if you don’t have a way to calm your thinking… I recommend meditation to everyone. That will help you choose happiness or choose a better feeling. You have to align yourself with positive energy, a higher energy. This lower-level energy that breeds confusion and jealousy and fear, you want to get away from that. You want to raise your vibration, and sometimes it’s as simple as connecting with nature and just getting out of the computer screen or just getting off the phone.”

HATEBREED’S NEW ALBUM, THE CONCRETE CONFESSIONAL, IS OUT MAY 13 VIA NUCLEAR BLAST