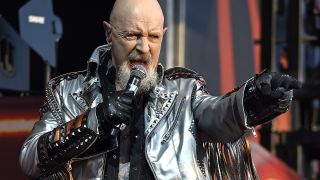 Judas Priest frontman Rob Halford got frustrated with a fan filming him at the band’s recent show at the Rosemont Theatre in Illinois.

Priest played the venue last weekend and during Judas Rising, Halford took exception to the person in the front row who was holding his phone up.

In video footage that has now appeared online, Halford can be seen walking forward and swinging his right leg, sending the phone flying deep into the crowd.

Check out video footage of the incident below.

Blabbermouth report that the situation came to a head when the fan in question turned on the light on his phone, which distracted the Priest frontman.

Halford joins a growing list of musicians who have reacted to fans and phones at concerts in recent years, including A Perfect Circle, Green Day, Slipknot's Corey Taylor, Disturbed and Peter Frampton.