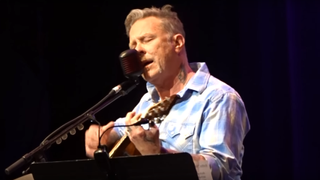 Metallica’s James Hetfield has made his first live appearance since leaving rehab.

The frontman appeared at tribute gig in Beverley Hills to late US singer Eddie Money, where he sang Money‘s 1977 hit Baby Hold On.

Fan-filmed footage shows a healthy-looking Hetfield telling the audience about his friendship with Money, who died in September 2019 after a battle with cancer. He explained how the pair met at an Oakland Raiders NFL game, where Money was singing the national anthem.

Said Hetfield: "I met him before he went out there, and he kinda blew me off," Hetfield recalled. "I thought, 'Who is this pompous ass?' And, if you spot it, you got it, is what I'm saying. So it was like two big dogs going in a circle around each other, which was kinda funny. I saw through it. I saw through that ego and he saw through mine, and we got to be friends, because I think our egos matched the size or our insecurities."

Metallica were forced to cancel their September 2019 tour of Australia and New Zealand after the singer checked into rehab for treatment relating to his ongoing struggles with addiction.

Hetfield made his first public appearance in early February to launch of Reclaimed Rust: The James Hetfield Collection exhibition, which features 10 of his classic cars.

Hetfield will rejoin his Metallica bandmates later this year for a series of US festival appearances, which will see there group perform two headline sets at each event.