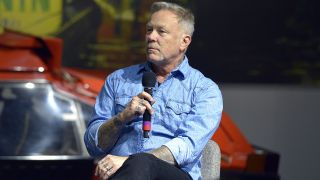 James Hetfield made his return to public life last night after his stint in rehab.

The Metallica vocalist and guitarist attended a reception at the Petersen Automotive Museum in Los Angeles on Thursday ahead of the Reclaimed Rust: The James Hetfield Collection exhibition, which features 10 of his classic cars.

Pictures and video from the event have appeared online, showing Hetfield looking happy and healthy after he checked into a treatment program in September last year.

Metallica were forced to cancel their tour of Australia and New Zealand as a result, but later vowed to “make our way to your part of the world as soon as health and schedule permit.”

Among the exhibits at the museum are Hetfield’s 1948 Jaguar ‘Black Pearl’ and his 1937 Lincoln Zephyr ‘Voodoo Priest’. The cars will be on display in the Bruce Meyer Family Gallery along with a selection of Metallica items and memorabilia, which includes his ESP Snow White Snakebyte guitar and the ESP Vulture in Black Satin.

A statement about the exhibition reads: “Best known as a co-founder, songwriter, singer, and guitarist for the heavy metal band Metallica, James Hetfield has also gained recognition in the automotive world for his unique collection of entirely bespoke vehicles.

“While the vast majority of collectors acquire vehicles by purchasing pre-existing examples, Hetfield elected instead to build his from scratch, channeling creativity often reserved for his music into the production of rolling sculptures.

“Hetfield, a lifelong car enthusiast, has described seeing cars in the same way he sees music: as forms of freedom and expression that convey the passions of their creator.

“At once classic and modern, Hetfield’s vehicles assert both a reverence for history and a disregard for convention, standing collectively as a testament to the musician’s distinctive personality and artistic energy.”

Hetfield will rejoin his Metallica bandmates later this year for a series of US festival appearances, which will see there group perform two headline sets at each event.