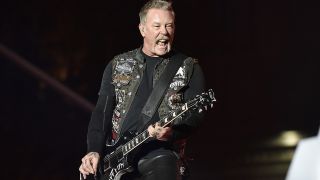 Metallica's James Hetfield has donated 10 of his classic cars to an exhibition which will open its doors in 2020.

The display will be at the Petersen Automotive Museum in Los Angeles and will be held in February next year.

Among the exhibits will be Hetfield’s 1948 Jaguar ‘Black Pearl’ and his 1937 Lincoln Zephyr ‘Voodoo Priest’. The cars will be on display in the Bruce Meyer Family Gallery along with a selection of Metallica items and memorabilia.

Along with his love of cars, Hetfield was a keen bike rider – but he admitted back in 2016 that he had stopped riding motorcycles in a bid to minimise risks to his health.

Hetfield told Jeff Woods Radio: “I sold the one I ride. I’ve got a few customs and things that were built for me, or I helped build. I love that part.

“I had my daily rider and I sold it last year. I just thought, ‘It’s not me, it’s the other guy. Something is gonna happen, and I want to be healthy, have all my stuff work.’

“I want grandkids to show up, I want to have some fun with them.”

Metallica will perform two special S&M2 shows in San Francisco on September 6 and 8. The footage will then hit cinemas around the world on October 6.