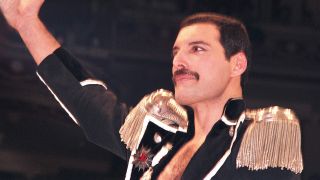 Last month, on what would have been Queen icon Freddie Mercury’s 73rd birthday, it was revealed that a box set celebrating the vocalist’s solo work would be released on October 11.

Never Boring will bring together special editions of Mercury’s 1985 album Mr Bad Guy, 1988’s Barcelona and a new 12-track compilation of some of his solo performances.

And, with just a week to go until the package is released, a video for the track Living On My Own has been released – which features a new audio mix along with 4K visuals.

However, the Rudi Dolezal-directed video was promptly banned by record company boss Walter Yetnikov on grounds of its “perceived promiscuity.”

The video remained out of the public eye until 1993 when the song’s No More Brothers’ remix was re-released by EMI. It subsequently reached no.1 in the UK, Ireland and France, with Mercury posthumously receiving an Ivor Novello Award for International Hit Of The Year in 1994.

Never Boring will be presented on three CDs, while a Blu-ray and DVD will feature 13 promotional videos and live performances with Montserrat Caballé – eight of which have been reassembled from the original 35mm film – and an interview.

The package will also feature a 120-page hardback photo book, with many of the images previously unpublished, along with thoughts and quotes from Freddie.