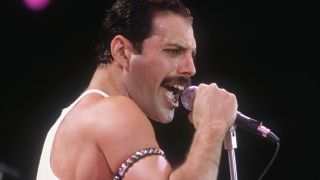 On what would have been Freddie Mercury’s 73rd birthday, a new box set has been announced featuring the Queen icon's solo work.

Never Boring: The Freddie Mercury Solo Box Set will be released on October 11 and brings together special editions of his 1985 album Mr Bad Guy, 1988’s Barcelona and a new 12-track compilation of some of Freddie’s solo performances.

Never Boring will be presented on three CDs, while a Blu-ray and DVD will feature 13 promo videos and live performances with Montserrat Caballé – eight of which have been reassembled from the original 35mm film – and an interview.

The package will also feature a 120-page hardback photo book, with many of the images previously unpublished, along with thoughts and quotes from Freddie.

Rami Malek, who portrayed Mercury in Bohemian Rhapsody, has written the introduction to the book, with the actor adding: “Never Boring brings to your life a piece of Freddie. I hope you’re able to sit with this collection and let the music, images and excerpts of Freddie Mercury’s life inspire you, like it did me.

“I hope you remember that your uniqueness is a gift, and what you do with it is your gift to the world. I hope like Freddie, you’re able to smile in the eye of a storm, focus on life’s silver linings, live boldly, and most importantly, live a life which is Never Boring.”

The box set will also include a double-sided poster featuring an image of Freddie and an original work from artist Jack Coulter which has been inspired by the song Mr Bad Guy.

All three albums will also be released separately on CD, LP and on digital and streaming platforms.

Also included in the package is the recently released track Time Waits For No One along with Love Me Like There’s No Tomorrow – which Beth David and Esteban Bravo have created an animated video for. Check it out below.

It’s also been revealed that an updated edition of Freddie Mercury: A Life, In His Own Words is to be released.

Compiled and edited by official Queen archivist Greg Brooks and Queen visuals producer Simon Lupton, the new edition will contain more than 8000 words that were not included in the original print.