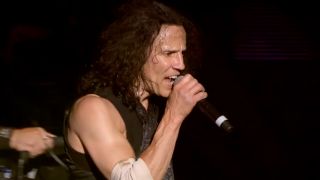 Extreme have released a video of their live performance of Get The Funk Out from their upcoming Pornograffitti Live 25: Metal Meltdown DVD.

The live package which was filmed at the Hard Rock Casino in Las Vegas last year, where the band played Pornograffitti in its entirety to celebrate 25 years since the album’s release in 1990.

The Blu-ray/DVD version also features Rockshow, a documentary that tells the Extreme story.

Frontman Gary Cherone previously said: “It was a great thrill to perform ‘Pornograffitti’ in its entirety. Some of these songs were never played live before so we had to go back and relearn them for the tour.

“The album was a watershed moment in the band’s career. It’s when we came in to our own and it will always be special.”

Guitar Nuno Bettencourt added: “The band always prided itself on its live performance. Over the years, some of these songs have evolved where the band actually plays them better now than when we had recorded them. Hope you enjoy it.”

Pornograffitti Live 25: Metal Meltdown is released on October 28 in the US and November 4 in Europe.