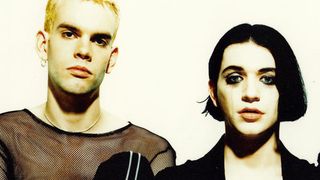 Placebo have announced that they’ll hold an online charity auction at the end of this month.

The sale of more than 300 items will get under way on September 29 and will come towards the end of the band’s 20th anniversary celebrations.

Among the items listed are Brian Molko’s ribbed jumper from the Pure Morning video, the Without You I’m Nothing CD single featuring David Bowie, signed by Bowie himself, the Vivienne Westwood jacket worn by Stefan Olsdal during their BRIT Awards performance in 1999 and Molko’s smashed Fender Jazzmaster Guitar.

Molko and Olsdal say: “There just seemed to be an endless list of stuff we’d gathered since that day it all began in a London tube station two decades ago.

“As the big ’20 years’ drew nearer, we thought it may be time to sift through it all before the hungry city rats got to it – see what would be worth saving from the proverbial fire. We thought to ourselves that maybe some people would even be interested in owning some of these items.

“We proceeded to scour our own personal wardrobes, our management office and the band’s own dark and dusty storage space to see what was hiding in cobweb covered corners.

“Placing our own nostalgia firmly on the shelf, we’ve decided to present our selection of what we believe to be the best and most recognisable items from over the years.”

Money raised from the sale will go towards CALM (Campaign Against Living Miserably), a charity dedicated to the prevention of male suicide in the UK, and The Mercy Centre, Bangkok, who provide care and support for underprivileged children.

The auction catalogue is now available to view, while Placebo will embark on a UK tour throughout October. Find further details below.

The Story Behind The Song: Nancy Boy by Placebo