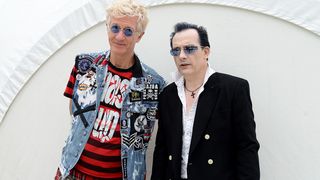 The Damned have announced that they’ll release their 11th studio album next year.

The as-yet-untitled record will be their first material since 2008’s So, Who’s Paranoid? and will mark the return of bassist Paul Gray.

It will produced by Tony Visconti and will be launched to coincide with their Evil Spirits UK tour which gets under way at the end of January.

The Damned say they “want to do the unexpected” on the album, with further details to be revealed in due course.

The band will be joined on the road by Slim Jim Phantom, known as the drummer of the Stray Cats who spearheaded the neo-rockabilly movement of the early 80s.

Find a list of The Damned’s Evil Spirits UK tour below.