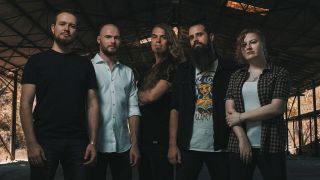 Voyager have premiered the video for their brand new track Brightstar exclusively with Prog.

The song is the first taste of material from the as-yet-untitled follow-up to 2017 album Ghost Mile, which is expected to launch later this year.

Frontman Danny Estrin tells Prog: “Brightstar is about the power of rationality, of the importance of science as an art, of facts, of the demise of empirical evidence in favour of blind belief in idols who spit forth a torrent of nonsense and generally about not believing in something or someone because it's shiny and bright and promises a warm blanket of comfort.”

The Australian outfit filmed the video in their hometown of Perth, and Estrin explains: “It's so refreshing to be playing in such wide open spaces and to use technology to create art.

“There was definitely something magical about the beauty of this blisteringly hot part of the country and I think this clip will capture that magic.

“We are proud to be from Perth and we want our fans to see what we see.

“We also want them to know that we almost burnt to a crisp on 40c heat to bring them this visual treat!"

Voyager are currently preparing to tour across Australia – a run that also includes appearances at Download Sydney and Download Melbourne.