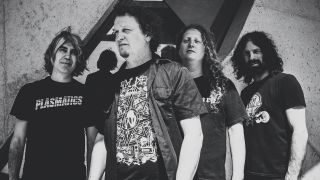 "Why Aug 9?," the band say. "It’s Denis “Snake” Belanger’s birthday and he wanted to party safely with all his friends and fans from around the globe since Voivod touring the planet has been grounded by the pandemic.

"Come one, come all! In an event not to be missed, VOIVOD performs a live in-studio set for an exclusive one time streaming broadcast on Aug 9, 2020 at 4 PM EDT (Eastern Daylight Time). This multi camera shoot and audio mix will happen in real time at the same studio VOIVOD recorded their Juno winning album The Wake."

Voivod recently released the three-track The End Of The Dormancy EP through Century Media.

Tickets for the live stream event cost $15CND, plus applicable taxes based on your location. Buy tickets.