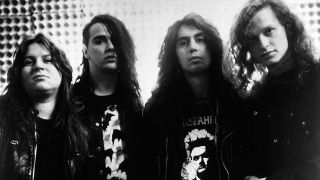 “The very first rock album I ever got was Rush’s A Farewell To Kings in 1982 and it’s still one of my top five records of all time. I’m a massive Rush fan, but Voivod were the definition of progressive metal for me in the late 80s.

I was 17 and into thrash when Killing Technology came out and they were doing something new. Every single song is great and the flow of the album is really good. I heard their music through going to rock nightclubs and they stood out because they were very unique in their approach to riffs and song structure. Their guitarist Piggy was quite unlike anybody else and more like a prog player with his bizarre use of chords and time changes. I was quite upset when he died in 2005 because he was an inspiration for me.

By the time of Dimension Hatröss, I was quite precious about Voivod. In your head you build up this idea of what the new album’s going to be and this wasn’t quite there but I still really like it, especially side one. After that, they completely changed. Paradise Lost started in ’89, which is when they did Nothingface, which was quite light, whereas we were doing a lot of heavy stuff. So, we parted ways until about 2011. It was Greg [Mackintosh, Paradise Lost’s lead guitarist] who told me about their live album Warriors Of Ice. I bought it and I was like, ‘God, that sounds ace!’ Then they released Target Earth in 2013 and I fell back in love with them.

I’ve seen them live a few times now. The first time was in 1993. We’d just finished recording Icon and we got taken out to see Voivod at the Marquee in London. It was ace and they played loads of songs I loved, but I haven’t actually met any of the band yet.

I’m actually finding a lot of new music at the moment, which is very exciting. God Is An Astronaut have been one of my favourite bands for years and my wife is slowly getting me into more and more old prog stuff like Camel. It wasn’t until long after we were married that I realised she was into prog!”

The remastered edition of Believe In Nothing is out now via Nuclear Blast. Visit www.paradiselost.co.uk.