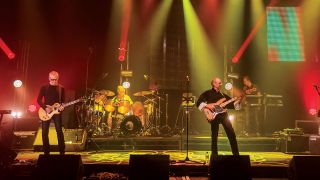 The new live set features the entire two-hour plus set from  the night, plus a host of live extras including Taking A Look Back a brand-new documentary, an animated history of Twelfth Night shown on the night, a slideshow with its own original soundtrack, and other items making up a truly special package. The soundtrack from the show is also being released separately as a stand-alone release. It is being released as a double CD presented in a jewel case. All three formats include extensive sleeve notes detailing various memories from the day, illustrated by a number of excellent photographs in a 12-page booklet.

2012 saw a flurry of Twelfth Night activity. Having unexpectedly reformed in 2007, former Lahost singer Mark Spencer replaced the departed Andy Sears and the band appeared at both Summer's End and RoSfest festivals before ending the year with the Barbican shows.

1. The Ceiling Speaks
2. Human Being
3. The End Of The Endless Majority
4. This City
5. World Without End
6. East To West
7. Creepshow

A Night To Remember is available to pre-order from the band's website.