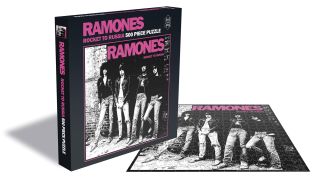 Following in the footsteps of metal titans Metallica and prog legends Rush, Ramones are the latest group to receive the jigsaw treatment, with a selection of their iconic album covers being selected to become jigsaw puzzles.

Zee Productions are about to release three separate 500-piece puzzles, each depicting the covers of the band’s albums. The albums being chopped up into little pieces are Rocket To Russia, Road To Ruin and live album It's Alive.

Each of the jigsaws is apparently printed on "high quality board", and is now available to pre-order, with the company previously releasing puzzles based around Iron Maiden, Motorhead, Judas Priest and Slayer.

Orders will be ready to ship in September.

As with the other puzzles, these jigsaws will be presented in a vinyl box set size, which the company say is “perfect to fit alongside your vinyl collection.”