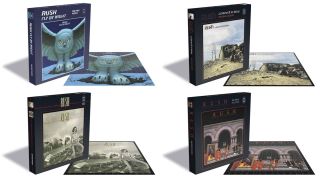 Hot on the heels of a series of jigsaws featuring Metallica album covers comes news that Rush are the next band to be put on a puzzle.

Each puzzle will be presented in a vinyl box set size, which the company say is “perfect to fit alongside your vinyl collection.”

All four sets are now available to pre-order.

Meanwhile, the Rush film Cinema Strangiato: An Annual Exercise In Fan Indulgence will be screened for one night only at theaters across the world on August 21.

The concert movie will take fans inside their 2015 R40 tour – a run of North American shows which turned out to be Rush’s last-ever road trip.

For tickets and to find out where Cinema Strangiato will be screened, visit the film’s official website.