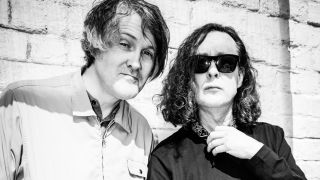 The Wonder Stuff and Ned’s Atomic Dustbin have announced a double-headline tour of the UK.

The bands will play 12 dates across the UK in March and April next year under the Love From Stourbridge 2018 banner.

They’ll be joined on the road by Pop Will Eat Itself’s Graham Crabb, who’ll perform a guest DJ set each night.

Both bands rose to prominence in the late 80s and early 90s, with The Wonder Stuff enjoying success with albums including The Eight Legged Groove Machine and Hup, while Ned’s Atomic Dustbin set the UK indie music scene alight with God Fodder in 1990 and the singles Kill Your Television and Happy.

It’s been 27 years since both bands shared the same stage – and The Wonder Stuff’s Miles Hunt says a conversation with Ned’s frontman Jonn Penney sparked the idea to tour together.

Hunt says: “Jonn and I were walking up the street the other day and words like ‘blessed’ were used for the love that’s still there for both bands.

“Randomly, when I checked social media, a guy was asking for the two bands to do a double header. I’ve always known the audiences want it. The planets have aligned so why not?

“I think it’ll be great. I look out at our audience and they’re big lads, they’re around the 50 mark, have they got the stamina for the two bands in one night? I guess we’ll find out soon enough.”

Both bands will play 75-minute sets each night featuring a “greatest hits collection.”

Penney says: “I’m less inclined to use the word ‘hits’ because we had none – and I don’t know about ‘best of’ so let’s call it ‘live favourites.’”