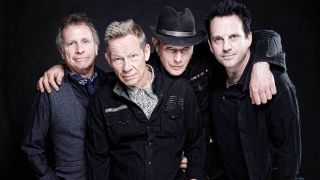 The Professionals have released a video for Going Going Gone, a song that ties the passing of two legends — David Bowie and Lemmy — to two infamous thefts from Hammersmith Odeon.

“I worked at the Odeon as a 16 year old. Got to see a lot of bands,” recalls guitarist Tom Spencer. “When Motörhead played someone stole their bomber lighting rig! This song ties this to Steve Jones’ infamous theft of Bowie’s gear on the Ziggy shows. We lost the two icons within about a month of each other - sometimes fate hands you a reason for a song!”

“It’s one of my favourite songs because there’s so many chord changes (a couple of them quite strange), and great solos from Steve Jones and Billy Duffy,” says Cook. “The drumming is pretty tasty as well.”

Other musicians featuring on the album include Guns N’ Roses bassist Duff McKagan and Def Leppard guitarist Phil Collen, plus Mick Jones from The Clash and Marco Pirroni from Adam And The Ants.

“After we got Steve to play on a few tracks I thought we could spice up some of the other songs,” says Cook. “So I dusted off the old punk rock address book and made a few calls.

“We’re buzzing about the album, and can’t wait to spread the buzz.”

What in the World is out now. The Professionals are playing this year’s Isle Of Wight and Camden Rocks festivals (full dates below).

The Professionals: "We didn't want to do this as a nostalgia trip"