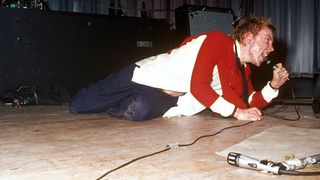 After the Sex Pistols dream ended in a nightmarish mix of rancour and recrimination, guitarist Steve Jones and drummer Paul Cook eventually returned with The Professionals.

Legal issues and drug problems kept success at bay, but now the latest line-up are giving it another go. There’s a new album, and amongst the featured musicians are Guns N’ Roses bassist Duff McKagan, Def Leppard guitarist Phil Collen, and Cult axeman Billy Duffy. We tell the full story in Classic Rock 244.

Below, all three pay tribute to the band where it all started, The Sex Pistols.

“I was around thirteen years old when I first heard the Pistols. Being from a family of eight kids, I finally had a band and sound I could claim as my own. Jonesy’s guitar sound and style, Cookie’s drum attack and groove remain the benchmark for what’s right with rock‘n’roll, and have influenced my every musical move since.

“I’m sure they don’t remember, but my band The Fastbacks opened for The Professionals in Vancouver in 1980 or ‘81. I was in the company of legends, and more than likely just another young goof they were trying to get away from (plus… I didn’t have drugs!). I became friends and then good friends with both of them in the mid-nineties because Steve and I played in the Neurotic Outsiders together.

“When Cookie asked me if I wanted to be on the new record it took me less than one half of one micro-second to say yes. I was never physically in the studio with the band, but I have a little home operation and was able to get a guitar sound that fit the tracks that they sent from England. It’s a great way to do it these days. I did the same a few years back on a Manics record.

“Did I enjoy being a Professional? Are you kidding me? They’ve always been one of me and all of my teenage friends’ favourite bands. They all freaked when I said: ‘Hey! Guess what?’ If you listen to my guitar playing on Neurotic Outsiders or Loaded stuff… it’s all about Steve. He taught me how to play through the Pistols and The Professionals.”

“I first saw the Pistols at their second Manchester gig in July 1976. They left a huge impression on me and, of course, like many people of my generation they changed the course of my life. Unlike many I still have the poster and two tickets – it cost a quid, by the way. I have to give a shout out to The Buzzcocks who opened the show with their first ever gig who were amazing too; I ran out and bought Spiral Scratch as soon as it came out. And also Slaughter And The Dogs, from my local council estate, who probably were the biggest reason I went to the show, to see the ‘local lads made good’.

“I met Steve [Jones] in Los Angeles in, I think, 1987 when The Cult were on a short break, after the Billy Idol arena tour we’d just completed, and before we embarked on our own headline tour with special guests Guns N’ Roses. I believe we were attempting – unsuccessfully – to record a song for a single. Too many distractions, I think. Steve came by on his big red Harley and let me have a go. Been mates ever since. As for Paul [Cook], I think I met him when he was drumming for Chiefs Of Relief, who played with The Cult at Brixton Academy around the same time.

“Paul asked me if I fancied playing on atrack or two of the new Professionals album in his usual no-stress, low-key way, and I was, of course, happy to do so.

“Once I had set up a studio session to play on the tracks, Steve Jones called me up, and initially I was worried he was gonna bollock me for playing, when in fact he asked me if he could come along at the same time and play a bit too. That’s how we ended up on the same three tracks. The session was fun, so we decided to do another, and that was how it came to be.

“It was an amazing experience for a fanboy like me to play with Steve and Paul. It’s probably apparent that we are all fairly close friends these days anyhow, and at times we have ‘jammed’ with each other, but it was still both an honour and a thrill, especially to record with Steve at the same time. On one of the tracks, I think I tapped into my inner Steve, the ‘when in doubt, Chuck Berry it out’ guitar solo approach which has served us all very well over the years.”

“The Pistols ushered in a desperately needed breath of fresh air, as the music industry and the country were becoming fairly stale. I never suffered teenaged angst as a kid because I had a release valve that was playing and creating music. But when I first heard God Save The Queen that valve was opened all the way. Forget genres and labels, the Pistols were the ultimate rock band with an absolute fuck-offness that I’d never heard before, that affected everything around it, from fashion, politics and uk society in general.

“As I’m from London I’d be playing in some of the same pubs and clubs that the Pistols were in. I’d also hang out in some of the same places as Paul and Steve so, it was the occasional nod ‘alright’ type thing, and after Def Leppard blew up we eventually started talking, especially if we were both touring the states.

“Aside from playing together in Manraze, myself and Paul have remained great friends outside the confines of the band, and Paul’s wife Jeni is an inspirational life-changing raw-food specialist as well as being friends with me and my wife, Helen. So when Paul and Jeni stayed with us in California earlier this year Paul said: ‘We’re doing a new Professionals album. Wanna play on it?’ I jumped at it. and one song turned into three. I recorded it at my house and I loved it. I naturally play guitar very aggressively, but don’t always get the chance to let go, so this was perfect.”

“Did i tap into my inner Steve Jones? absolutely. i love Steve’s playing and he is an inspiration. I’ve told him before but I’m not sure he believes me. Steve’s guitar sound is one of the two best guitar sounds I’ve ever heard live, and I’ve seen everyone from Zeppelin to Van Halen, and Steve’s energy and sound is still the best. and I’ve always loved Paul’s playing. Probably because he uses the sticks upside down so he can hit the drums harder. But the two of them are like a living, breathing entity. It’s such a rare delight.”

You can read the story of The Professionals in Classic Rock 244. Buy it online or become a TeamRock+ member to read it right now.

The Professionals: "We didn't want to do this as a nostalgia trip"