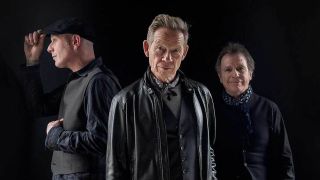 Paul Cook’s old band has a new album out. And it’s been a long time coming. Recorded at Zak Starkey’s studio outside London — with the guest contributions sent in from all over the world — it’ll be released on October 27.

But let’s start by going back. After the breakup of The Sex Pistols, Cook and guitarist Steve Jones formed The Professionals, a deliciously trashy rabble whose songs picked up where The Pistols’ Silly Thing left off. Jones’s fat riffs led the charge, and the occasional chorus seemed destined for the terraces. But two albums later (only one was released during the band’s three year life), cursed by drug problems and a car accident, they called it a day.

Now they’re back, and Cook is leading the charge. “I guess the time felt right,” he says. What’s more, Cook has roped his mates in. Steve Jones appears on three tracks, and there are guest appearances from from Def Leppard’s Phil Collen and Guns N’ Roses bassist Duff McKagan. The Clash’s Mick Jones is on board. So is The Cult’s Billy Duffy. Marco Pirroni from Adam And The Ants has signed up. It’s quite a line up.

“After we got Steve to play on a few tracks I thought we could spice up some of the other songs,” says Cook. “So I dusted off the old punk rock address book and made a few calls.”

Joining Cook in the full-time Professionals line-up are bassist and Subway Sect member Paul Myers, and singer/guitarist Tom Spencer, whose CV includes time with The Lurkers, The Yo-Yos and The Men They Couldn’t Hang. “I’ve know Paul Myers for years,” says Cook. “I’ve been drumming a bit for Subway Sect more recently, so he was back in my musical life. Tom I met when he sung Pretty Vacant at a gig where we were both guests.”

The first song to emerge from the reunited band is Good Man Down, featuring Billy Duffy and Steve Jones, and it picks right up where the old band left off. The riff swaggers. The singer snarls. The chorus soars. It’s music for nights at the boozer and afternoons at the match. “We’re not breaking any musical boundaries,” says Cook. “We’re doing what we do best. From the heart, with energy and integrity.”

The band are also playing two shows to celebrate the album’s release, in Wolverhampton and London (dates below).

“We’ve been adding a new track or two to live shows but can’t wait to try some of the other new songs,” says Cook. “We’re buzzing about the album, and can’t wait to spread the buzz. Of course there’ll be old stuff played too. We don’t cover Pistols stuff (apart from Silly Thing) but as the [London] gig’s 40 years to the day from Nevermind The Bollocks was released, we might just add a cover or two!”

There’s also talk of new music. “We’ve already started writing,” says Cook. “There’s talk of us releasing some vinyl singles after the album release, so what we’re writing might be the B sides. But you never know…. it could be the seeds of the next album.”

What In The World can be pre-ordered now from Pledge Music.

What In The World Tracklist:

The 10 most underrated UK punk albums of all time