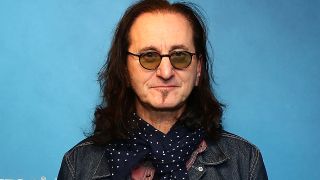 Geddy Lee has announced a Canadian tour in support of his Big Beautiful Book Of Bass.

It was published back in December through Harper Collins and sees the Rush vocalist and bassist explore the history of the instrument, with the book also featuring contributions from vintage expert Terry Foster and his Rush bandmate Alex Lifeson.

Along with interviews and signing sessions on the tour titled Geddy Lee’s Official (Yet Kind Of Random) Big Beautiful Book Of Bass Tour, Lee will be on hand to open a bass exhibition at Studio Bell at The National Music Centre in Calgary.

The exhibition will run from May 26 until January 2, 2020, where 26 bass guitars will be on display to the public.

Lee says: “The instruments featured at Studio Bell are a combination of rare vintage basses from the golden age of guitar production as well as significant ones that I’ve used throughout my career. Basses that I’ve scoured the world to get my hands on.

“This exhibition gives people a look into the origins and the earliest years of the instrument that help shape popular music… as well as the ones that I’ve lovingly held in my hands for over 40 years as I developed a sound that I could call my own.

“It’s the largest display of basses from my personal collection ever and I’m excited to share this with my fans in Canada.”

Highlights include Lee’s Rickenbacker 4001, which appeared on numerous Rush recordings from the 70s and 80s, his signature 1972 Fender Jazz bass which he played on Moving Pictures classic Tom Sawyer and a 1961 Höfner “Cavern” bass, identical to Paul McCartney’s signature instrument.

Tickets for the tour are now on sale.

Rush will release a graphic novel based on the creation of their 1977 album A Farewell To Kings in September, while the band’s live history will be celebrated in the book Wandering The Face Of The Earth which will be published on October 15.