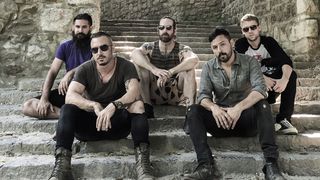 The Dillinger Escape Plan have announced details of their last-ever show.

The band said in 2016 that they would bring the curtain down on their career following their current run of dates in support of latest album Dissociation.

And now they’ve revealed their final date will take place at New York’s Terminal 5 on December 29, with special guests Code Orange and Daughters.

Tickets will go on sale from Friday, August 11.

Last year, the band’s Ben Weinman said he would miss their frantic live shows when they call it quits, but added: “In another respect, this grind is hard so I think that being able to focus on other things is exciting. And you can’t really do that unless you close some doors. I do think about the fact that I can’t do this forever. Physically, it’s just not possible.

“It forces you to have to either go down a road that a lot of musicians go down, drugs and alcohol, and just fall apart… but we’ve used it as an opportunity to learn about ourselves and grow. To dive inside and look into what it is that makes us tick and makes the world tick.”

It was revealed last week that The Dillinger Escape Plan would receive the Outstanding Contribution To Music prize at September’s Association Of Independent Music Awards.

Find a full list of The Dillinger Escape Plan’s remaining live shows below.