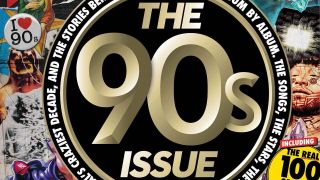 This month, we decided to do something a little different and celebrate and explore the most insane decade in metal history. Ladies and gentlemen, may we present: The 90s Issue.

For the first time ever, Metal Hammer goes back in time to give you the definitive guide, album by album, year by year, to the decade that changed everything – and we got a few friends to help us make it extra special.

Check out the tracklist below!

….oh, and then there’s the MAGAZINE

We bring you the stories behind the craziest decade in metal’s history, through the eyes of the men and women that were right there on the frontlines. Year by year, album by album, from Alice In Chains becoming grunge’s first superstars in 1990 to the rise of black metal in 1991…

From the likes of Sepultura, Machine Head and Type O Negative spearheading the Roadrunner revolution…

…to the amazing, untold story that took The Crow from cult comic to movie phenomenon…

We also look into the rise and tragic demise of nu metal stars-in-waiting, Snot, whose chance in the 90s spotlight was cruelly snatched away…

Plus, we find out what made thrash and death metal almost come off the rails…

…oh, and we talk to THE GREEN POWER RANGER HIMSELF, Jason David Frank! Hell yeah!

Whether you wanna relive some glory days or learn about a decade of metal brilliance, you need this issue – and this CD – in your life. On sale now. Getcha pull.