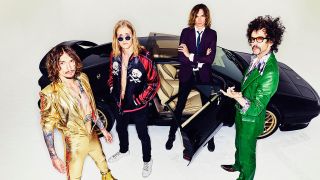 The Darkness have released a video for Solid Gold, taken from the band’s upcoming album Pinewood Smile.

“We have written this song to reassure you all that having now released more music in the period after our well publicised hiatus than in the period before it, we have no intention whatsoever of stopping,” says Darkness frontman Juastin Hawkins. “Hence the lyric ‘We’re never gonna stop… Shitting out solid gold.’ Barring any unforeseen circumstances, The Darkness will always be here to delight and beguile. You’re welcome.”

The track is a piece of no-nonsense boogie which opens with the line “We’re going to blow peoples’ fucking heads off,” and proceeds to take the music industry to task via further bouts of profanity.

One section aimed at A&R men features the lines, “There’s a guy coming down from Sony Artist and Repertoire / If he likes what he hears in those stupid ears / I can buy myself a faster car / Blowing smoke up our arses / Everything we do is ace / He wants to wine and dine us / He’s desperate to sign us / Cos we melted his fucking face.”

Earlier this month The Darkness released a video for All The Pretty Girls, and last month the band announced a run of UK tour dates which will take place throughout November and December. Find a full list of dates below.

Meanwhile, Simon Emmett’s documentary about The Darkness planned for 2018 successfully passed its £25,000 crowdfunding target on August 1.

Pinewood Smile will be released on October 6, but can be pre-ordered now.

The Darkness' 10 best songs you may have missed