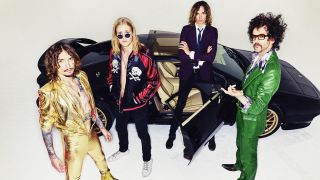 The Darkness have announced that they’ll release a new studio album later this year.

The follow-up to 2015’s Last Of Our Kind is titled Pinewood Smile and will launch on October 6 via Cooking Vinyl.

To mark the announcement, The Darkness have released a stream of the lead track from the album All The Pretty Girls which can be heard below.

Frontman Justin Hawkins says: “Why should anybody care? Because if you don’t, we’re fucked! History will remember us as the apathetic generation who negligently ushered in a dreadful dystopian age that may or may not come to be known as The Rise of the Arseclowns.

“We cannot allow this to continue! You may not give a shit about Brexit or Trump, but please, give a shit about The Darkness otherwise the last bastion of cultural sensibility will fall and our airwaves will be polluted by meaningless pop purveyed by arseholes and morons… Oh wait!”

The band have also announced a run of UK tour dates which will take place throughout November and December. Find a full list of dates below.

A documentary about The Darkness is also planned for 2018, with filmmaker Simon Emmett sifting through more than 250-hours of footage for the film. The film is seeking £25,000 in crowdfunding, with the total so far sitting just under £10,000.

The Darkness Quiz: Permission To Land