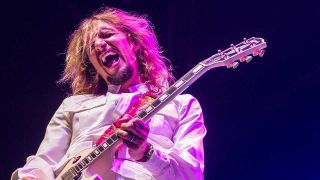 The Darkness's Easter Is Cancelled tour will hit The UK from November.

"Join The Darkness in their mission to take back control from the fools and liars who purport to lead us, and instead march forwards into the sunlit uplands of inclusivity, togetherness and rock’n’roll fellowship," say the band.

Every British, rock-loving household seems to have a copy of The Darkness’s Permission To Land.

Whereas fads grow and fade, they’ve outlived the initial boom that saw them plastered on the front of every UK magazine imaginable and headlining Reading & Leeds on the back of their debut record.

Permission To Land is essentially a greatest hits package, but there’s rubies aplenty amidst the Suffolk rockers’ esteemed musical marquee.

Now we look forward to the band's sixth studio album Easter Is Cancelled, and the tour that follows (full dates below),

“The Darkness are joyous warriors, here to prick the pompous and kick the arses of those who seek to destroy us," say the band. “Easter Is Cancelled sees the four maestros embark upon their most ambitious quest to date with their musical opus soon to be thrust into the ear canals of rock fans around the globe, and a tour that will quite literally resurrect the souls of all who attend."

Here are 10 hidden Darkness gems that shine just as brightly as their best.

Because it’s always Christmas where The Darkness are concerned, we figured this one should go first. Not quite the willy-referencing wonder that was Christmas Time (Don’t Let The Bells End), I Am Santa is a festive treat for all the family… if your family likes Hot Space-era Queen with jingle bells on top.

As usual, Justin Hawkins’ sky high vocals work a treat and he turns in an absolute ripper of a guitar solo, but it’s a cameo appearance from Santa himself that steals the show. “I said son, thank you for the cookies!” Terrifying.

When he’s not singing about shagging, Justin’s got a proper knack for folklore. On Love Is Only A Feeling’s B-side, said mystical musings are explored on Curse Of The Tollund Man; a man encased in peat rises again and unleashes terror upon everyone he sees.

Straying not just lyrically but musically from the Darkness’ usual shtick, this track dances around a maypole in a semi-acoustic, almost Led Zeppelin fashion, but it’s driven by that pummelling rhythm section that is Ed Graham on drums and Frankie Poullain bashing the bass – they’re usually hidden beneath layers of duelling guitars and high-pitched vocals, so their prominence here is a treat.

The Darkness rarely air Curse Of The Tollund Man live, but when they whipped it out during their Permission To Land anniversary shows in 2013… it was a bit special.

Beginning with a glorious “Huh” from Justin, Wanker has it all from the off. There’s cowbell, horns, vintage guitars, the word ‘wanker’ being delivered with the panache of a preacher on poppers, then halfway through: “Look into my eyeballs!”

This B-side to One Way Ticket is a criminally overlooked Darkness diamond; had the title been changed to something less wanky and it had been released as a single, this could’ve been a right old hit.

It still hangs onto that overblown, overpriced racket One Way Ticket To Hell… And Back pumped out but the turns of pace within Wanker’s relative brevity work wonderfully. Plus, y’know, cowbell.

“Surrounded by millions of people that I hope I never have to meet! Searching for a sweet lady woman to share a little body heat!” God, the Darkness are great, aren’t they?

Comeback record Hot Cakes is stacked with steaming hot treats, but Concrete’s a cut above; it’s got the singalong qualities of Nothing’s Gonna Stop Us, the mind-boggling drama of their Radiohead cover and enough grit to keep the roads safe at Christmas, Poullain’s bass in particular preventing any crashes. An absolute anthem.

Cordially known as the Darkness’ main riff machine, Dan Hawkins lets himself go a bit on One Way Ticket To Hell… And Back and ended up playing most of the bass parts following Poullain’s departure from the group.

One of the more ludicrous moments on the album comes in the form of English Country Garden and it is so fun; Justin’s piano is downright mental, the guitar solo is an absolute beast and you just can’t deny the authenticity of a man singing, “They did a quiz at the village fête and we came last” and “my cock and Farmer Giles’ prizewinning marrow.”

It’s so Queen circa A Day At The Races/A Night At The Opera and all the better for it.

Dan’s riffs are undeniably catchy, the acoustic guitar through the second verse is a beast and the whole thing’s just another tick for the Darkness’ fourth album, Last of Our Kind.

The Darkness are about as British as the Queen riding a Corgi into a fish and chip shop, and Shake (Like A Lettuce Leaf) is a shining example of that. Mercilessly demoted to a B-side for Is It Just Me?, this track is essentially Justin listing lots of food because yeah, it’s all a thinly veiled euphemism for sex.

“You keep your cordon bleu and your seedless grapes. You know where you can stick your brown eggs.” Bon Scott would be proud, especially of that “shake it till the slugs fall off” backing vocal. This has never been played live and that’s a bloody crime.

Released as a stand-alone single at the tail-end of 2013, The Horn was a taster of what we thought was going to be the Last Of Our Kind. Actually not appearing on that record, it’s still a great song; the riffs are heavier, the lyrics are saucy, and the whole chorus is a lesson Def Leppard ought to take on board nowadays.

The last thirty seconds of British Steel-ish Judas Priest chugging and Justin’s cirque du vocal are every bit as silly as you’d like, but not the silliest bit of the song. No. The Horn’s oddest moment comes near the beginning, Justin doing a Midnight Cowboy and saying, “I’m walkin’ here!” for reasons unknown.

Playing second fiddle to Get Your Hands Off My Woman’s single, The Best Of Me is a proper retro rocker that lays the blueprint for bands like Foxy Shazam.

Its exclusion from Permission To Land could’ve been due to its archaic qualities , which could seem almost like pastiche to the uninitiated; for the average Darkness fan, however, The Best Of Me is most definitely the best of the Darkness, packing unrivalled Thin Lizzy leads and, as expected, a gravy-spurting guitar solo.