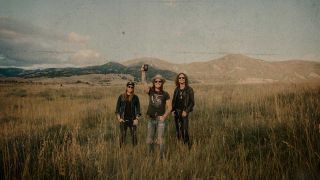 The Cadillac Three have launched a video for their latest single, Slow Rollin'. The track is taken from the band's upcoming Country Fuzz album, which is released on February 7 next year.

We featured the audio in our Tracks Of The Week roundup this week, describing the song as "more Nashville than Chet Atkins eating a plate of hot chicken… deep vocal gravel – straight from the pipes of Billy Gibbons – while guitars, lap-steel and southern drawls are laid on thick n’ tasty. Like swaggering through molasses, en route to a rodeo."

Country Fuzz is the follow-up to 2017’s Legacy, and also features the already released singles All The Makin’s Of A Saturday Night and Crackin’ Cold Ones With The Boys.

"We've been Country Fuzz forever," says frontman Jaren Johnston. "When I think of Southern rock, I think of Lynyrd Skynyrd. When I think of country, I think Garth Brooks. This record and this band are all of that. But it's also ZZ Top and Jerry Reed. It's Medeski Martin & Wood and Prince. There's no better way to describe who we are than Country Fuzz."

"It's not easy to land on something that is your own thing, but we're proud to say we did that," adds drummer Neil Mason. "It works for us in any direction that we're going. Country Fuzz is anything from a stripped-down country ballad to a sludgy, riff-heavy rock song. And it's also country-funk."

"We've matured as musicians and as a band," says bassist Kelby Ray, whose lap bass line is largely responsible for the trio's one-of-a-kind vibe. "Our sound is second nature to us and that only comes from playing together for as long as we have."

The Cadillac Three will be performing on next year's Country 2 Country UK and European tour alongside Luke Combs, Darius Rucker and Eric Church. It’ll stop off in Berlin, Amsterdam, London, Glasgow and Dublin in March.

The Cadillac Three will release their new studio album Country Fuzz in early February. The record features the lead singles All The Makin’s Of A Saturday Night and Crackin’ Cold Ones With The Boys.View Deal