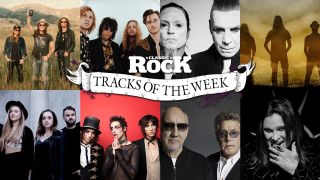 Eight new rock tracks, from eight very different bands, and you decide which one’s the best. We’ve got freaky blues, swaggering country, a protest anthem, a beautiful tune from revived classic rock veterans, and more besides.

Choosing one winner? Not an easy task. So let’s start by looking at last week’s top three, as voted for by you:

Congratulations Shadow & The Thrill! And full props to Marcus King and The Mysterines for well-earned second and third place tracks. Now, check out this week’s shortlist and vote for your favourite in the poll at the foot of this page, right after a spin of last week’s winner.

More Nashville than Chet Atkins eating a plate of hot chicken, we couldn’t not include this just because... well, listen to it and you’ll see. Jaren Johnston shows off some deep vocal gravel – straight from the pipes of Billy Gibbons – on this latest slice of Country Fuzz, while guitars, lap-steel and southern drawls are laid on thick n’ tasty. Like swaggering through molasses, en route to a rodeo. Yeah.

The Struts - Somebody New

A fresh take a track from The Struts' second album Young&Dangerous, as Luke Spiller takes the original band ballad, turns it into a one-man-and-a piano spectacular, and brings new levels of poignancy to the whole thing in the process. Yes, there's a lot of Freddie Mercury in the performance, but Spiller does this better than anyone. And you've gotta love the video, which finds our hero singing the song on a keyboard plonked down on a slip road outside a castle.

Till Lindemann and Peter Tägtgren’s latest musical baby tells a tale of cosmonauts, brothers and a love triangle... or a love quadrangle, or something... honestly we’re not 100% sure, but have a look and see what you reckon. More importantly, though, it’s a groovy headbanger that’s as fun and catchy as it is deviant and dark. If Billy Idol flirted with industrial metal and immersed himself in some Soviet and East German history, it’d probably sound a bit like this.

"This is a protest,” the band have said of this dirty, post-punky call to arms, written in response to America’s gun violence epidemic. “In hopes to give this new generation a revolution in the form of an anthem. We are all on the verge of waking up and truly understanding that people should not be afraid of their government, government should be afraid of their people.” And it’s not all talk; they’re also donating proceeds from the single sales to Giffords and March For Our Lives.

The Who - I Don’t Wanna Get Wise

Probably one of Roger Daltrey’s strongest vocal performances on The ‘Oo’s new album (which is saying something; he’s pretty fucking good on the whole thing), on a heartwarming tune that shifts through the gears – sweet, bittersweet, contemplative, rousing, slightly unexpected – with stirring ease. It’s been said before, but if this is how The Who story does end, what a way to go.

This blast of bluesy, psychedelic rock cooked up by Swedish trio Kamchatka encompasses stoner weight and oddball jazzy freakouts. This might make it sound a little impenetrable, but trust us – it really isn’t. Catch them on tour with Clutch and Graveyard in December, and pick up the new album, Hoodoo Lightning, that same month.

Part blue collar anthem, part country rock singalong, part Celtic jig, the new single from British rootsy troupe Morganway is a breezy romp for wintery times. Accompanied by a video depicting a young couple frollicking in tourist London, it’s the musical equivalent of someone handing you a free cup of hot mulled wine on the South Bank – unrevolutionary but pleasantly surprising and guaranteed to brighten your day.

Ozzy out-cliches himself here, with an N.I.B.-style "all right now" just 19 seconds into Straight To Hell and a "come on now" thrown in for good measure 12 seconds later. The quality of Ozzy's output always depends on who he's working with, and we think he may have stumbled across another perfect partner in former California Breed guitarist Andrew Watt. The riff is solid, there's some spooky monk-style chanting, Ozzy sounds like he's having a great time, and there's a rare use of the word "defecate" in popular song.