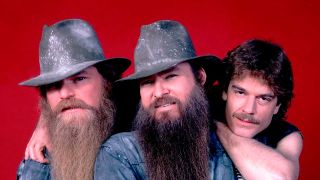 Can’t pick one. Impossible!” That was Toto’s Steve Lukather’s response when we asked him to pick his all-time favourite ZZ Top track. “Simply, it’s just the real thing,” he continued. “You can’t learn what Billy does. You have to have lived it – just like the whole band has!”

And, to be fair, he does have a point. It’s a damn difficult decision to make. But to celebrate ZZ’s half-century, we did manage to coerce some other outstanding players into making their choice.

Warren Haynes: "Aside from being a really cool song, Blue Jean Blues is the ultimate example of Billy Gibbons’ s guitar playing."

John 5: "That’s easy – Brown Sugar from ZZ Top’s First Album, and then Just Got Paid from Rio Grande Mud. When I was hanging out with David Lee Roth, he said he just listened to these records – and nothing else!”

Steve Vai: “My favourite is Cheap Sunglasses from Degüello. The atmosphere of the song just makes you feel cool.”

Tyler Bryant: “I Gotsta Get Paid, because it showcases how BFG and the boys take the best from the past and keep it so incredibly fresh. Only they could do it like that."

John Petrucci: “Growing up, I’d hear La Grange all the time played on the local rock radio station. It was one of those songs like Free Bird, where the DJ never apologised for the extended outro guitar solo. I remember loving it the first time I heard it – that slick shuffle feel, signature drum fill and the quirky vocal approach all caught my attention.

"Even more so, of course, was Billy’s finesse on the guitar. The feel, and that tone! Just so unmistakable. My friends and I used to jam on it all the time. And if you can somehow nail those insane artificial pick harmonics that Billy pulled off so expertly, it was a sort of rite of passage in our little home-town guitar circle.

“Fast-forward to the first of many G3 tours that Joe Satriani would invite me to be a part of, and there I was night after night playing La Grange as one of our end-of-show jam songs, trading solos with Joe and Steve Vai. In fact Billy came out to one of the shows in Houston and we all traded together. Talk about a surreal moment."

Heard It On The X

Paul Gilbert: “I played Heard It On The X in my cover band when I was fourteen and it was a highlight of our set. I love the trade-off vocals, the proto-Hot For Teacher rhythm guitar lick and twangy chromatic line. And I’m pretty sure the solo is slide guitar through a wah-wah.”

Charlie Starr (Blackberry Smoke): “It is nearly impossible to pick a favourite ZZ Top song. Today I’ll say it’s I’m Bad, I’m Nationwide. As usual, the guitar tone is absolutely perfect, and is there anything cooler than that little stutter lick before the verses? I don’t think so."

(Somebody Else Been) Shaking Your Tree

Paul Sayer (The Temperance Movement): “I love (Somebody Else Been) Shaking Your Tree, off ZZ Top’s First Album. It’s hard to imagine Billy Gibbons as anything other than a legend now, but you can really hear the fire in him as a young guitar player making their first record here, and you also can hear the echoes of everything else that’s going on at the time, from Free to Freddie King."

Peter Frampton: “I have many ZZ Top favourites, but Jesus Just Left Chicago from Tres Hombres reminds me of when I first saw them play. Frampton’s Camel opened for them then, and they were an instant new fave."

Just Got Back From Baby's

Nils Lofgren: “I’ve always loved Legs. It has a great driving-train groove, and Billy’s harmonics and funky lead still makes me smile. My old band Grin opened for them a bit in the early seventies, and they were all memorable nights.”

Joe Satriani: “I know everyone will pick La Grange. It’s as impossible to resist its charm today as it was the day it was released. However, the most WTF BG guitar sound has got to be in Loaded, from Rhythmeen. Only the Rev. Billy Gibbons could dream up, figure out how to record and make that beautifully broken guitar sound work. Pure genius.”

Lowdown In The Street

Jimmie Vaughan: "Lowdown In The Street, off Degüello. It’s about the scene at the old Rome Inn in Austin back in the day. Billy was kind enough to shout out several people in the song – including me! Good times.”

Waitin' For The Bus

Buzz Osborne (The Melvins): “Waitin’ For The Bus has the best Billy Gibbons guitar solo ever – and the best subtle use of a wah-wah pedal I’ve ever heard."